The 6 GT is a big car, and as a result, offers plenty of space for passengers – large or small

The new BMW 6 Series GT is much more practical than the 5 GT it replaces. By making a few key changes, the firm has improved the packaging of its niche executive hatchback – improving passenger and luggage space in the process.

Up front, the driving position is higher than you’ll find in a 5 Series, but it’s a very comfortable car to drive long distances. All cars get a lower rear bench for improved headroom, too, while the longer wheelbase means kneeroom is also improved. Finally, bootspace has grown by up to 110 litres, making it much easier to load bulky items.

The BMW 6 GT is over five metres long, 1.9m-wide and 1.54m-high. To put that into context, it’s fractionally shorter than a 7 Series, but just as wide and even taller. It’s a big car, whichever way you look at it, in fact - and it feels that way on the road.

There is simply no arguing with the space on offer inside the BMW 6 Series Gran Turismo. It really is as spacious as a 7 Series, while the more practical hatchback tailgate means loading large items shouldn’t prove too tricky, either. 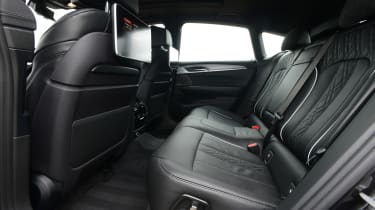 Take a seat in the rear, and the 6 GT shames its conventional rivals. It’s much bigger than the outgoing Audi A7 and Mercedes CLS, that’s for sure. It’ll even shame SUV alternatives like its X5 sibling, as well as the Porsche Cayenne and Audi Q7. Only a Range Rover can compete.

By ditching the 5 GT’s theatre-style rear bench, the 6 GT offers more headroom for taller adults. The longer wheelbase, which now matches that of the latest 7 Series, means legroom is improved, too. Optional reclining backrests are available, electronically tilting by up to six degrees for extra comfort.

A big complaint about the old 5 GT was with regards bootspace. In response to this, BMW has added an extra 110 litres with the seats up, and 100 litres with the seats down. That means the 6 GT offers a total load space of up to 1,800 litres. For comparison, even the Shooting Brake version of the outgoing Mercedes CLS only boasts 1,550 litres, while the space is bigger even than you’ll find in a BMW 5 Series Touring.