The 6 Series GT is more comfort-oriented than the 5 Series, and is less sharp to drive as a result. Engines are strong, however

Don’t be fooled by the 6 Series name – the GT is not a coupe with any sort of sporting intent. For starters, the 7 Series platform means that it’s notably heavier then a 5 Series, despite the 6 GT being, on average, 115kg lighter than the model it replaces.

It’s targeted at buyers who are more interested in having a comfortable cruiser than something that’s razor sharp in the bends, which is why BMW expects a high proportion of sales to come from the high-end private hire and limousine industry. However, this is still an ‘Ultimate Driving Machine’ (so the adverts say) and as a result expectations of a decent driving experience are higher.

Base cars use the same double wishbone front and multi-link rear suspension as the 5 and 7 Series, but the 6 Series GT also features air suspension as standard on the rear axle. So far we’ve only tried models fitted with the adaptive full air suspension system, which give a cossetting ride in Comfort or Auto mode and are hardly uncomfortable even in Sport mode. Noise levels are commendably low in all models, too, and the car isn’t far off the 7 Series in terms of outright comfort. The only thing to watch is that the larger wheels on M-Sport models can upset the 6GT’s ability to deal with sharp potholes. 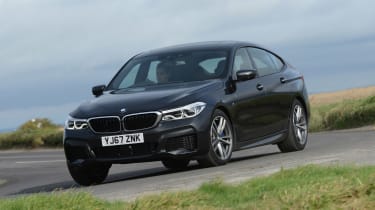 The adaptive suspension also helps keep the body relatively flat and level in the bends, although a 5 Series still has the edge in this regard. BMW can only do so much to disguise the car’s kerbweight (every variant is over 1.8 tonnes), but it’s certainly more agile and composed than a similarly-sized SUV. The steering is quite remote, however, meaning this isn’t the driver’s choice in BMW’s range.

There’s only three engine options offered with the 6 Series Gran Turismo from launch; two petrols and one diesel.  The base 630i is a 2.0-litre four-cylinder petrol producing 258bhp and 400Nm of torque. That’s enough to get it from 0-62mph in an impressive 6.3 seconds, helping in no small part by the smooth and fast changes of the ZF-sourced eight-speed automatic gearbox.

It’s performance will be perfectly adequate for most, but when pushed it become a bit coarse and it needs revs to extract the best from offet. The 640i is anything but coarse thanks to its melodious turbocharged six-cylinder engine. It manages 0-62mph in 5.2 seconds thanks to 340bhp and 450Nm of torque, while the engine is smooth and responsive. It’s also available with BMW’s xDrive all-wheel drive system. 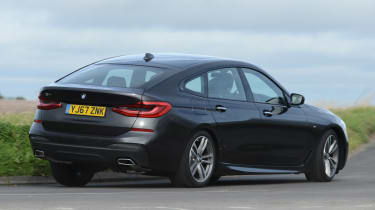 Overall, though, it’s the diesel that offers the best compromise between performance and efficiency.  With 265bhp and a whopping 650Nm of torque it’s capable of 0-62mph in 6.1 seconds (six seconds dead with the xDrive all-wheel drive system, yet is capable of well over 40mpg a cruise. It’s also pleasingly hushed and refined, with only a smooth six-cylinder tone noticeable under hard acceleration.