The BMW 6 GT is a big car, and with big cars come big bills

It’s best to think of the BMW 6 GT as a hatchback version of the 7 Series, because whichever way you look at it, the big Bimmer is an expensive car to buy and run. The most fuel efficient model is the 630d SE Auto, which emits a respectable 129g/km of CO2. Officially, it’l return 57.6mpg, which is pretty good for such a large car.

However, when you look at list prices, the 6 GT’s starting figure of more than £50,000 means all cars are subject to the government’s tax levy for cars over £40k. That means road tax (or VED) stands at £450 every year for the first five years.

Go for M Sport spec and the emissions rise to 135g/km (thanks to the bigger wheels), and fuel consumption rises to 55.3mpg. This also affects the car’s BiK band for company car drivers – jumping two brackets. What’s more, the Autumn 2017 budget penalises diesel owners even more, and will affect all new 630d models. 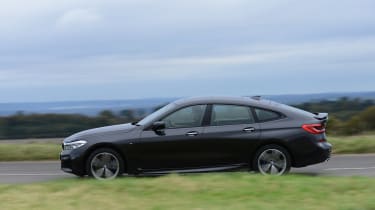 The petrol 630i and 640i xDrive models are even more expensive to run, however. The rear-wheel drive 630i SE emits 148g/km and BMW says it’ll return 43.4mpg. The 640i, which is only available with xDrive all-wheel drive, will struggle to return more than 30mpg - with higher emissions, too.

BMW 6 GT insurance groups are high, ranging from group 41 to group 44. That means every version will command high premiums – though rivals should be similar.

Residual values for the BMW 6 GT are actually quite good, despite the car’s high list prices. All models are expected to retain between 43 and 47 per cent of their value after three years and 60,000 miles, with the 630d M Sport posting the most attractive figures. The outgoing Mercedes CLS doesn’t perform quite a well, though the new model due in 2018 will no doubt improve on this.