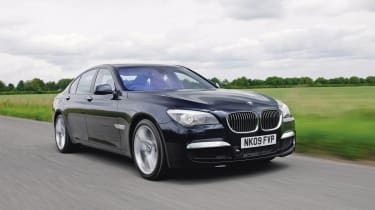 There’s no better 7-Series than the 740d. Its breadth of performance is staggering, as is its ability to return 40mpg-plus. Why anyone would buy a petrol version is beyond us!Factor in a chassis that benefits from BMW’s excellent Dynamic Drive Control system, and you have a big saloon that is sporty yet comfortable – all at the flick of a switch. Yet no matter how fantastic the 740d is, we can’t justify the extra outlay over the already superb 730d.

The luxury car world has been turned upside down by Jaguar’s stunning new XJ. So what are the big cat’s rivals doing to compete with this latest flagship head-turner?
Well, even though the new 7-Series has only just been launched, BMW will offer a hybrid version next year. For now, there’s the 740d – the most powerful diesel 7-Series ever.
Under the bonnet is an even more muscular version of the 3.0-litre six-cylinder twin-turbo oil-burner that powers the 730d, which will make its way into the new 5-Series, too. It produces 61bhp more, at 306bhp, and delivers a massive 600Nm of torque – a 60Nm advantage.

Hooked up to a slick-shifting six-speed auto, the unit propels the newcomer from 0-62mph in 6.3 seconds – a second faster than the 730d – and 155mph. Drivers won’t be penalised at the pumps, though. In fact, as the 740d returns 40.9mpg and emits 181g/km of CO2, it’s even more efficient than the current 730d – although a revised version of the latter is due in September.
How does the model perform on the road? Well, it’s absolutely storming. The enormous torque output means response is instantaneous and supercar-fast between 50mph-75mph.
It’s easy to find yourself travelling at very high speeds, partly because there’s so little wind or engine noise, while the blend of comfort and a range of around 600 miles makes this a supreme long-distance car.
The way the 740d tackles corners is just as impressive. As with all 7-Series, it has Dynamic Drive Control. This gives the option of Comfort, Normal, Sport and Sport + modes, which alter the responsiveness of the steering, suspension and traction control. It means you can make the car boulevard-smooth one minute, sports-car-firm the next.
As you’d expect, all this comes at a price. The 740d will cost over £58,000 – around £5,000 more than the 730d. The latter is fast enough for most, but if you have the funds, the new car is a wonderful all-rounder.