Our verdict on the updated BMW X1, which has triggered a huge uplift in sales of the Audi Q3 rival 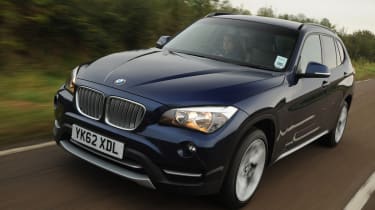 In the face of tough opposition like the Audi Q3 and Range Rover Evoque, it’s a shame BMW hasn’t gone further with its updates to the X1. Interior quality is improved, but the design remains fairly bland and unexciting. Even so, it’s still a practical family car that’s good to drive and cheap to run – which explains why BMW is selling so many.

What a difference a year makes. The facelifted BMW X1 arrived in dealers in September, and sales for the month promptly jumped 32.9 per cent over those recorded 12 months earlier. So what’s driving the increase?

Not the design, that’s for sure. The X1 has always trodden an awkward line between small estate and SUV, and the revised car isn’t much different. There are new lights, less plastic cladding and indicators integrated into the door mirrors, as well as a bolder rear bumper treatment.

The overall effect tilts the balance more towards estate than SUV, but it still isn’t as convincing as the latest 1 Series, or its larger X3 and X5 brothers. And it really struggles next to the stylish Range Rover Evoque.

The changes aren’t obvious inside, either. The X1 retains the dated design that’s derived from the original 1 Series. There are minor upgrades to materials that were previously a little below par.

That said, the new xLine spec does help to lift things. It brings plush leather seats, dark copper interior trim, switchable ambient lighting and luxury floor mats that make the X1 feel quite posh, if not quite as nice as an equivalent Audi Q3. The xLine gets 18-inch alloys and extra chrome and aluminium on the outside, too.

But while quality is one thing, the X1’s big appeal remains its spacious, flexible interior. As before, the rear seatback splits 40:20:40, so you can combine people and luggage in different ways. Added to this, you can move the rear seatbacks to an almost vertical angle, giving an extra 120 litres of boot space – up from 360 litres with the rear seatbacks in their usual setting.

With the seats down, the X1 has 1,350 litres of space and, thanks to its relatively low-slung body, it’s really easy to load, too.

While the design changes to the car are minimal, mechanical changes are non-existent, unless you opt for the smooth eight-speed auto gearbox, which replaces the old six-speeder.

The diesel engine remains responsive, yet impressively frugal for a four-wheel-drive car, and the six-speed manual is as knuckly in feel and precise in action as ever. At low speeds, the steering is still very heavy, but once up to speed this BMW is pretty sharp to drive. It still features off-road kit like hill descent control, but the X1 is happier on the road than off it.