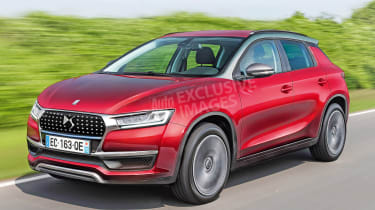 The DS brand revolution continues, and with the push upmarket will come a range of new products. The existing DS 3, DS 4 and DS 5 have all been revamped for 2015, but next on the agenda for PSA’s newly formed luxury brand is a DS 3 SUV. Our exclusive images show how it may look.

Citroen confirmed DS would become its own premium brand last year, with ambitions similar to those Toyota had with Lexus back in the late eighties. But there’s been no all-new products launched as yet, bar the DS 4 Crossback – which is essentially a jacked-up version of the revised DS 4.

However, with the demand for SUVs in China and Europe seemingly insatiable, DS is prioritising a more conventional move into that sector. And we understand that a dedicated DS 3 SUV will arrive alongside an all-new DS 3 supermini in 2018.

Given the current DS 3 was launched in 2009, it means a long lifespan for the existing MINI Cooper rival, but the wait is necessary for PSA to design a new scalable platform (known as Common Modular Platform or CMP) as a base for up to 10 new future models. 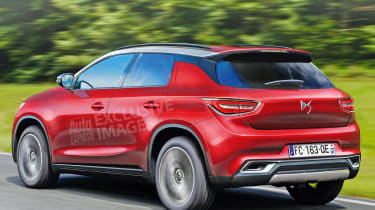 These include the two DS 3s and even the next Peugeot 208. The investment will come from PSA’s alliance with Chinese state-owned brand Dongfeng. The smaller, sportier DS 3 hatch is expected to retain the same three-door layout as before, while the SUV will get a more practical and roomier five-door design.

Tell-tale DS styling touches include the DS 3’s shark fin panel (pushed back from B to C-pillar), curvaceous lines and chrome-covered hexagonal front grille, but it takes on a more purposeful stance with a raised ride height and body cladding.

Sources say DS has identified the MINI Countryman as one key rival, but that cars such as the Mazda CX-3 and forthcoming Audi Q1 will also be potential targets.

Despite the extra ground clearance, we understand that four-wheel drive won’t be offered on the DS 3 SUV, as it would cost too much to adapt the modular platform from front-wheel drive. Besides, DS claims that when four-wheel drive is offered on smaller, more fashion-led SUVs such as this, it isn’t often taken up by customers. 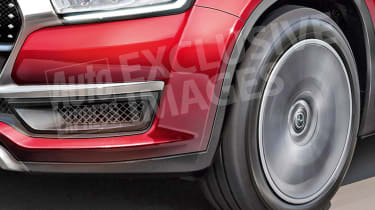 What we will see are major revisions to the current DS engine line-up, as 2017 marks the introduction of tougher Euro 6.2 emissions regulations. It’s expected the relatively new 1.2-litre PureTech petrol engine will be carried over with only minor efficiency tweaks, but the 1.6-litre THP petrol may see major alterations – or be dropped.

Given the 2017 regulations are set to be tougher on diesels, PSA will have to invest in upgrading its 1.6-litre BlueHDi engines for the next DS 3.

Both cars will be produced at the factory in Mulhouse, France. Details are scarce on the overall cabin updates, but DS’s priority to offer “refinement and avantgarde design” will likely result in improved quality. Rest assured that the company’s distinctive French style will be carried over, too.

Given the premium aspirations of DS, we can expect a starting price of between £18,000 to £20,000. As a result, it’ll sit ahead of the likes of the Renault Captur, but in line with Mazda’s CX-3.

Read our group test of the cars that the new DS 3 SUV will have to beat here.