Older drivers most likely to drive through floods 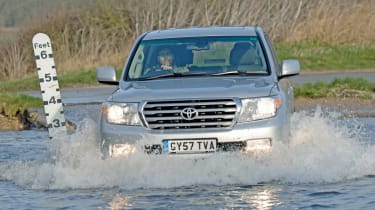 Drivers over 65 are most likely to drive through flood water, risking damage to their car according to a survey by the AA.

In total half of drivers in the UK would risk putting themselves in danger by driving through flood water with 18 to 24-year-olds the most cautious age group.

The results come as the Environment Agency launched its Flood Action Campaign that looks to educate people on the dangers of heavy rainfall and storms. Alongside the AA, the Agency is reminding people that just 30cm of flowing water is enough to float a car.

• How to drive in heavy rain and floods

In the last five years, the AA has been called out to almost 23,000 flood rescues. The top three places in the UK for flood rescues have remained the same as drivers try to negotiate dangerous fords.

John Curtin, executive director of food and coastal risk management at the Environment Agency, said: "The sheer number of people of all ages who wouldn’t think twice about a potentially fatal decision to drive through a flood is deeply worrying. Our message is simple: don’t.

"It’s so easy to check if your route is affected by flooding, our warnings and alerts are updated every 15 minutes.  If you see flood water on the road ahead, you should avoid unnecessary misery and turn around and go another way."

The latest survey figures also showed men are less likely to turn around than women, too, with three-quarters of male drivers admitted they'd plough on.

Regionally, drivers in the north east and south east - excluding London - were the most likely to carry on driving while London drivers were the most cautious and would turn around.

Olly Kunc, AA director of road operations, said: "While it’s easy to assume it will never happen to you, even the most experienced driver could be out of their depth in flood water. Last year, more than 2,500 AA members became stranded while attempting to pass through a waterlogged road.

"Even a small amount of water ingested through the air intake will wreck the engine, while 30cm of fast-flowing water could float your car. Flood water is dangerous and masks other hazards, so it’s just not worth the risk to you, your passengers and those who have to rescue you for the sake of a few miles’ detour."

For everything you need to stay safe on the roads this winter, check out our winter special...