Hazard Perception Test tips: all you need to know to pass

DVSA Hazard Perception Test tips for learner drivers, and what to expect when you take the test 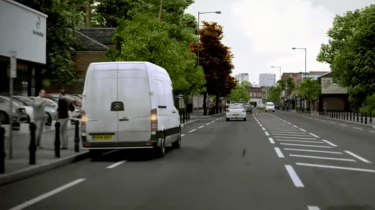 Learning to spot any potential hazards while behind the wheel is a critical factor when it comes to driving safely, and it’s definitely something that improves with experience on the road. The best drivers are constantly scanning for situations which could result in an accident and adjusting their speed and position to ensure they can react in time.

In fact, there are plenty of advanced driver training schemes out there that focus on the subject of hazard perception, as being aware of the potential dangers unfolding around you is a potential lifesaver. Police drivers wanting to get the highest qualifications actually have to give a spoken commentary of the hazards they spot when they are driving with an instructor.

The government knows hazard perception is a crucial part of road safety, which is why the video-based Hazard Perception Test has been a significant element of the Driving and Vehicle Standards Agency’s (DVSA) Driving Theory Test since 2002. Your Hazard Perception scores must reach a certain standard, or you’ll fail the theory test even if you’ve been able to answer all of the Q&A section correctly. That means it’s vital that you’re prepared for the test, and know what to expect before you turn up for your Theory Test booking.

What is the hazard perception test?

In practice the Hazard Perception Test always follows the Q and A section of the Theory Test, and you won’t know if you’ve passed the Theory Test until you’ve completed both. Unlike the Q and A which has right and wrong answers, the Hazard Perception Test pass is based on a computer analysis of the time it takes you to react to events unfolding on a series of videos.

These videos are designed to present various real-life potential hazards of the kind you’ll confront every day when driving on your own after a successful test pass. Your job is to spot the key moments in the video and click a computer mouse to register you’re aware as early as possible before these potentially tricky situations have a chance to develop.

The tests are straightforward to sit and don’t require any more computer skills than the ability to click a mouse, but they can still cause problems for some candidates. Fortunately, to make it easier the Driver and Vehicle Standards Agency has a YouTube video explainer, and there are plenty of opportunities to practice the hazard perception test online, mainly on driving school websites.

Meanwhile, we’ve put together this guide featuring the best ways to prepare for it, how long the test takes and what it comprises of, plus what you should and shouldn’t do when it’s your turn to take it.

At the beginning of the test, candidates are shown a video clip about how the test works, but it’s a good idea to get your head around this before you get to the test centre so you are fully prepared and can concentrate. There are plenty of practice hazard perception tests available online, so practice as many as you can to get an idea of what you’ll need to do and what to look for.

You can also practice looking for potential hazards if you are a passenger in a car or on a bike – it’s a good habit to get into and will prepare you for the day you have a full licence and are driving on your own.

The perception test itself consists of fourteen video clips which feature road scenes you can expect to encounter during everyday driving, with at least one developing hazard – that’s something that will cause you to take some form of action (for example changing direction, slowing down or braking). There will also be one clip in the test that will feature two hazards. 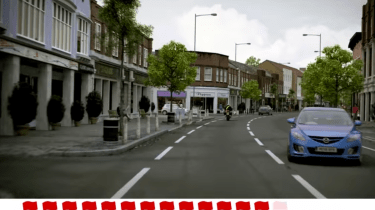 The method used to measure your awareness and ability to react to potential hazards is based on you clicking a computer mouse once for every potential hazard you recognise. Don’t go thinking you can get away with clicking frantically at everything that moves though.

Instead of gaining marks for being extra cautious and aware, it will actually count against you as there is a hazard perception click limit.

At the other end of the spectrum, not enough clicks will also indicate that you’ve not seen potential problems. Candidates who click in a regular pattern, such as every few seconds, will also fail.

For each video clip, noticing and responding to each hazard as early as possible can achieve a maximum of five points. You'll be informed of your score at the end and to pass the perception test, you’ll need to score of 44 out of 75.

The hazard perception test lasts twenty minutes, and you don’t get the chance to go back and repeat any of the clips or questions – just like real-life driving where you don’t get a second chance. 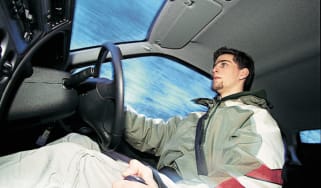 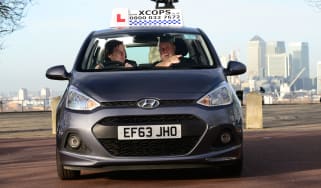 This is our simple, step-by-step guide to learning to drive and getting your full UK driving licence
Intensive driving courses: the ultimate guide 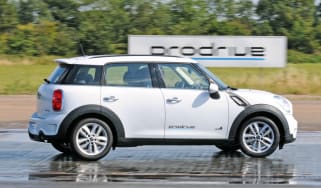 Are intensive driving courses a good way to get a driving licence? We guide you through the options to help you pass the practical test.
Best first cars for new drivers 2020 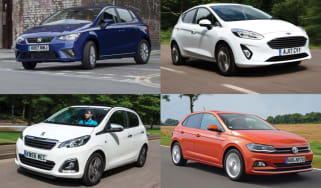 A new car for first time drivers should be cheap, easy to drive and safe. Here are the 10 best first cars