We brought you all the biggest cars from the Paris Motor Show as it happened. Now check out our A-Z ultimate guide on video 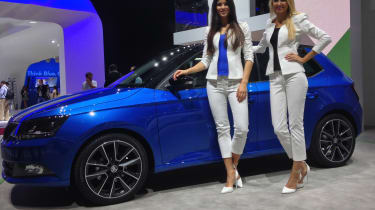 The Paris Motor Show is one of the biggest events in the motoring calendar, and this year's show didn't disappoint. The stands were packed with all the latest production and concept cars, and we were on hand to bring you all the latest news from the show.

• See all the news, videos, pictures and rumours from the Paris Motor Show

There were some big launches at this year's show, from the humble Skoda Fabia to the beefy Mercedes AMG GT, as well as concepts from Lamborghini and Audi, to name just a few.

Not only do we have a comprehensive video round up from this year's show (below), we've also got individual videos of the star cars - scroll down to see them all.

Audi revealed its latest TT concept in Paris - the Sportback. Following the TT Allroad Shooting Brake concept revealed earlier this year, the TT Sportback is a stretched, five-door version of Audi's latest coupe and represents the company's intent on expanding the TT family beyond the existing models and hitting its target of 60 individual models on sale by 2020.

Honda revealed the Civic Type R concept and immediately caused a stir with its huge rear wing and eye-catching blue paint-job. Hot hatch fans will be on the edge of their seats waiting to get their hands on this car, and with Honda chasing the front-wheel drive lap record at the Nurburgring, it's no wonder.

The Jaguar XE was revealed at a headline-grabbing event in London in early September, but Paris saw its public debut. The BMW 3 Series rival has been a long time coming, and it looks set to shake up the compact executive class with aggressive looks and a sporty feel.

The Lamborghini Asterion is a plug-in hybrid concept with 897bhp and a 199mph top speed, but it boasts economy figures of 78mpg and CO2 emissions of just 98g/km. Billed as a hyper-cruiser, the Asterion represents a more usable everyday Lamborghini when compared to the Huracan and Aventador.

Land Rover's highly-anticipated Discovery Sport was on show in Paris, and is set to go on sale in 2015. It is due to replace the Freelander and will eventually be available with JLR's new family of Ingenium four-cylinder engines.

This year marks 25 years of the Mazda MX-5, and the fourth-generation model debuted at the Paris Motor Show. Utilising a new SKYACTIV chassis and engine combination, Mazda is aiming to ensure the new MX-5 remains to be the world's favourite roadster.

Inspired by the outgoing SLS AMG, this is the new Mercedes AMG GT. Taking aim at the likes of the Porsche 911 and Jaguar F-Type R, the AMG GT comes with a new 4.0-litre bi-turbo V8 engine with either 446bhp or 503 bhp in 'S' form.

Skoda's supermini, the Fabia, made its debut at the Paris Motor Show amongst a rabble of much more expensive cars. Complete with a sharper exterior, posher interior and a range of efficient engines, the Fabia looks set to remain Skoda's most popular model.

Pulling off one of the biggest surprises of the Paris Motor Show was Volkswagen with the XL Sport. Based on the XL1 eco-car, the XL Sport is powered by a Ducati motorbike engine putting out 197bhp and is capable of hitting 167mph. It's purely a demonstration of the VW Group's technical abilities, though, and won't go into production.