As Alpine returns with its A110 sports car, we see if it’s a match for the Porsche 718 Cayman and Audi TT RS 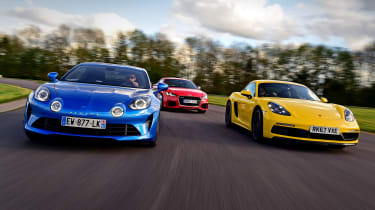 You might be wondering what a small French-registered sports car with an unfamiliar badge on its nose is doing lined up against two firmly established German sports models.

For readers with a longer memory, though, this is an exciting moment: far from being a new manufacturer hoping to take on two of the greats, Alpine is a name with a history of motorsport victories and beautiful sports cars.

The Alpine brand has some heritage to it, then, but is this new A110 model a return to the glory days of the sixties, or has the French marque got left behind during its absence from the market?

The A110 is built at the firm’s plant in Dieppe, where its parent company’s Renault Sport models are also made. Engineers from the Renault Sport team have also had a hand in the Alpine’s development. So this new model has heritage and modern-day performance car kudos.

But can it really take on the mighty Porsche 718 Cayman S and Audi TT RS? Read on to find out if the A110 can beat its more powerful rivals on UK roads… 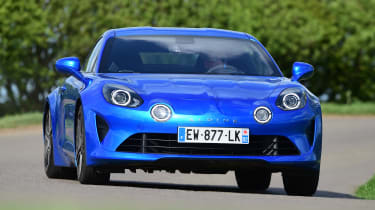 The Alpine A110 isn’t a new name; it’s shared with the sixties icon from which it takes its design inspiration. This is an all-new car, though, and uses a mid-engined, rear-wheel-drive layout just like its namesake. It’s a thoroughly modern sports car with a 249bhp turbocharged petrol engine.

The driver-focused design philosophy of the Alpine sounds promising, and the good news is that the A110 is fantastic to drive. The car has an initially softer feel in the way it rides than its rivals here, allowing more body roll when you turn into a corner than either the Porsche or Audi.

However, once you start to get in tune with its character and build up the pace, it’s very rewarding. The movement in the suspension set-up not only means it’s comfortable even over rough roads, it also maintains traction very well, but when the wheels do start to slide, it feels natural and fun. 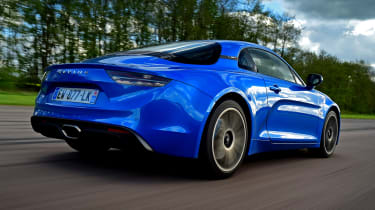 The Alpine’s chassis feels lively and engaging, and while it’s ultimately not quite as dynamically adept as the 718 Cayman S, the A110 is just as much fun to drive from behind the wheel, albeit in a subtly different way to the Porsche.

Both trump the TT RS for driver appeal, yet neither car’s engine is as entertaining as the Audi’s sublime five-cylinder unit. The 1.8-litre four-cylinder in the Alpine is strong and sounds great, and is more fun to rev than the gruff flat-four in the Cayman S.

While the Alpine doesn’t match its rivals for off-the-line pace, taking 4.6 seconds to get from 0-60mph (the Cayman recorded 3.9 seconds and the TT RS 3.5 seconds), it put in very strong in-gear times: 30-50mph in third and fourth took 2.0 and 2.8 seconds respectively, thanks to short gearing, beating both of its rivals’ times. In top gear, the A110 went from 50-70mph in 5.7 seconds, while the Porsche took 9.3 seconds and the Audi took 8.0 seconds. 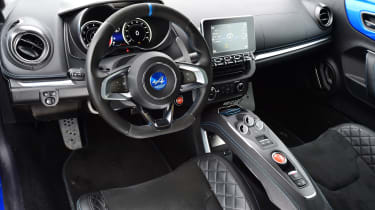 While it wasn’t as fast from a standing start, that low kerbweight helped in gear, while the lack of mass and the superb chassis mean the A110 wouldn’t be left behind by its rivals on a winding road or a track.

The low seating position offers good visibility and comfort even when driving hard. The dual-clutch box isn’t as snappy as the Porsche’s PDK transmission, but does its job and is fast enough to satisfy a keen driver.

Testers’ notes: “At 4,180mm long and 1,798mm wide, the Alpine is the smallest car of the three. Combined with good visibility, it feels easy to place and therefore very rewarding to drive, even on tight B-roads.” 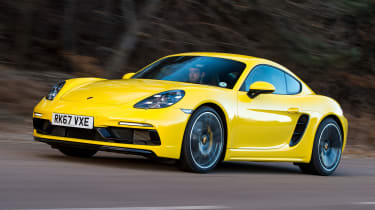 There are plenty of options when you’re picking a 718 Cayman. First, you can choose between the standard car and this 2.5-litre 345bhp S model. Then there’s the manual or PDK auto boxes; it’s the latter we have to match its rivals, at £53,853.

The Cayman’s ride is a bit stiffer than its rivals’, but not by a huge margin. It means the Porsche shines on twisting tarmac. The PASM adaptive dampers allow a range of settings, although the 718 is always composed and offers enough compliance to balance its firm set-up. 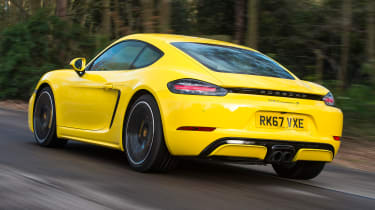 Despite the 20-inch wheels, our car was comfy over rough B-roads, and wasn’t short on traction. Body roll is tightly managed and the Cayman’s control weights are heavier and more satisfying than its rivals’, which combine with the sublime driving position to create one of the best enthusiast’s cars you can buy.

There’s a lovely level of feel through the steering that gives you a sense of the 718’s balance. There’s much more feedback than in either of its rivals, particularly the numb TT RS, and the Cayman comes alive when you push it hard, sweeping through bends with incredible composure. It’s a very satisfying car to drive and you can feel – and, importantly exploit – the Porsche’s agility.

The PDK automatic transmission is smooth when you need it to be and shifts quickly when you’re driving hard; it’s one of the best gearboxes around. Unfortunately, however, the flat-four engine is disappointing. It has plenty of power, and the low-down torque results in some pretty serious performance figures. But it sounds genuinely unpleasant, and the exhaust ‘enhancer’ button on the centre console just makes this drone even louder. 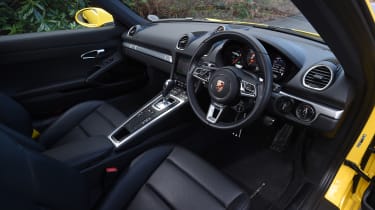 Still, the Porsche managed a very impressive 3.9-second 0-60mph sprint time, despite being rear-wheel drive only. It also took a blistering 3.6 seconds to go from 30-70mph through the gears, well ahead of the A110’s 3.9 seconds thanks to the superior, faster-shifting box. The TT RS posted a time of 2.1 seconds in that test, though. The Porsche’s 3.0-second time from 50-70mph in fifth gear is also particularly impressive, beating the Audi by a whole second and the Alpine by a second and a half.

Testers’ notes: “The flat-four engine in the 718 S produces 420Nm of torque from just 1,900rpm, which means you can exploit the car’s sweet chassis with less effort. You don’t always need to be at high revs to enjoy it.” 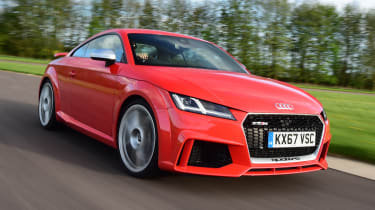 The RS is the flagship of the Audi TT range, and at £52,480, it’s also one of the priciest models in the line-up. Still, with 395bhp this car has some pretty serious performance up its sleeve. It’s the most powerful model here, but also the heaviest, so can it match two talented rivals for pace and handling?

There’s real rally heritage present in the Audi, just like there is in the Alpine A110. With the TT RS, it’s the quattro four-wheel-drive system and turbocharged five-cylinder engine that remind us of Audi’s impressive record in the sport in the eighties. 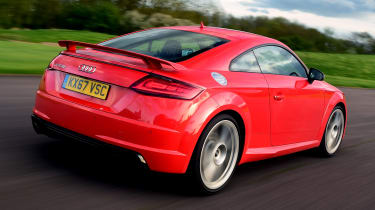 The engine dominates the car. It defines the way the TT drives and is ballistic. There’s a little turbo lag, but as the revs rise the noise is intoxicating, turning from a deep growl into a musical wail. And with 480Nm of torque available from 1,700rpm, the Audi makes its advantage pay in a straight line.

It sprinted from 0-60mph in just 3.5 seconds, which is partly because of the engine’s power output, partly down to the quattro four-wheel-drive system and partly thanks to the swift seven-speed dual-clutch gearbox. The box isn’t quite as rapid as the PDK unit in the Porsche, but is a match for the Alpine’s DCT transmission.

A heavy kerbweight and longer gearing meant it was a tenth of a second behind the Alpine from 30-50mph in third gear, taking just 2.1 seconds. It completed the same test in fourth gear in 3.3 seconds, though, which was slower than both rivals but still blisteringly fast in a wider context.

Exploiting the TT RS’s engine is great fun, so it’s a shame the handling doesn’t quite match it for engagement. The Audi is very grippy and composed, but because it’s quite heavy, it just doesn’t have the agility or balance of the Alpine or Porsche. While the steering is fast and accurate enough, it doesn’t relay the same feedback as its competitors. 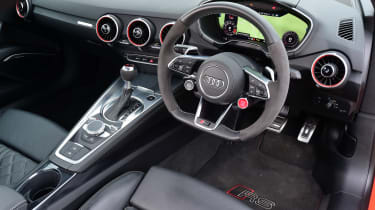 It does ride fairly well, and even feels relatively smooth at low speed, but the lightweight Alpine and superbly set-up Porsche have the Audi’s measure for smoothness as well, especially on a bumpy B-road.

Testers’ notes: “The four-wheel-drive system makes the most of the power to deliver strong performance, but the RS understeers on the limit and, disappointingly, doesn’t have the adjustability of its rivals.” 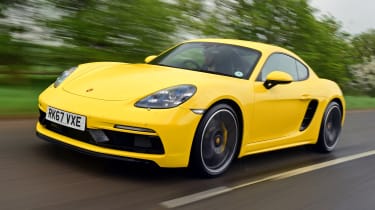 Superior handling nudges the 718 Cayman ahead in this photo finish. It rides and steers beautifully, and delivers incredible pace. If the flat-four engine served up a more effervescent character and it had more standard kit, this would have been a more convincing victory. The Alpine is nearly as much fun and has a more entertaining engine, so for some buyers it’ll be the better pick. 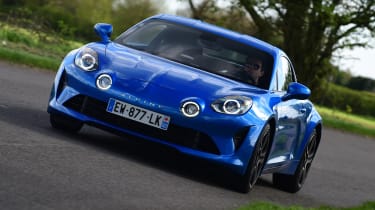 The new A110 is a sublime sports car and very much deserves the legendary badge on the bonnet. Its tidy handling and smooth ride mean it’s brilliantly entertaining, and the focus on weight reduction has huge benefits to economy as well as agility. It feels very different to the Porsche on the road, but is very nearly as engaging. It also looks stunning and feels just as special. 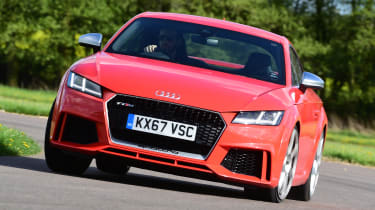 The TT RS boasts one of the best engines on sale today, which for some people will be reason enough alone to choose one. It’s good to drive, but doesn’t offer as much depth of adjustability as its rivals, which is why it loses out here. However, it is more practical than the Porsche and Alpine and has a generous amount of standard kit, although it is pricey to buy and run. 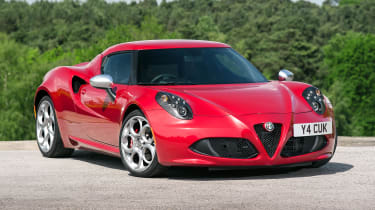 The Alfa 4C uses the same low-weight philosophy as the Alpine, with a carbon-fibre chassis and a mid-mounted four-cylinder turbo petrol engine. Powertrain and chassis flaws hurt its appeal, but it’s similarly focused and light weight. 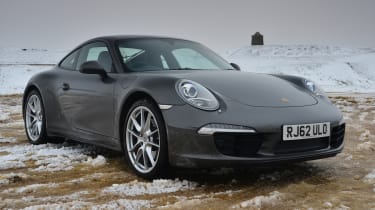 A used Porsche 911 brings arguably the best of all three rivals here. It has a sublime chassis, a superb six-cylinder engine and enough practicality, too. We found a 43,000-mile 991-generation example from 2012 in the classifieds for just £48,995.