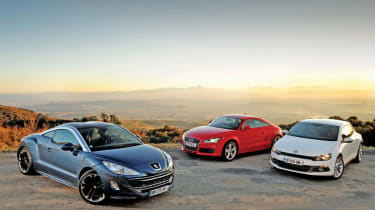 The Lion is sharpening its claws. Peugeot had a big year in 2009, introducing a redesigned badge, creating a new styling direction and taking victory in the world-famous Le Mans 24 Hours endurance race. And 2010 sees the launch of its most exciting car in years...

The new RCZ coupé is designed to inject some passion into the brand and re-establish its sporty credentials. Available to order now, the sleek two-door offers a choice of petrol and diesel engines, all at a competitive price for the class.

The Audi TT is our current Coupé of the Year, and the styling similarities of the RCZ are obvious – so the German car was first aboard the ferry to the Peugeot’s European launch in northern Spain. When the original TT arrived in 1998, its radical shape redefined the sector, and the second-generation model still sets the benchmark. With superb quality and a great driving experience, it’s easy to see why the Audi is our favourite.

Completing our trio is the Volkswagen Scirocco. It blurs the lines between coupé and hatchback bodystyles. But however you judge the VW, it looks the part. It’s also good value, great to drive and wears a desirable badge.

So, does the stunning new Lion roar to victory in this test, or go out with a whimper?

Peugeot has achieved exactly what it set out to. Any concerns that the RCZ wouldn’t have the driver appeal to match its looks were quickly dispelled on the twisting roads of northern Spain. But the TT and Scirocco are no pushovers – so picking a winner was incredibly difficult.

First to fall was the VW. It’s a superb car and fantastic value for money, plus it’s easily the most practical model. But as a stylish hatch rather than a pure coupé, it just doesn’t feel as special as its rivals. That means the Peugeot still has a chance to claim the scalp bosses are so desperate for – that of the Audi TT.

The German two-door is one of the most desirable cars money can buy. It is great to look at, sit in and drive, while the quality, image and refinement on offer make it one of our favourite models.

Yet the RCZ THP 200 is the sportier choice. Thanks to its chassis tweaks, the flagship delivers better body control and sharper responses than the TT. And it has the kind of handling we expect from a sports car.

The newcomer is also cheaper and better equipped than the Audi – so, by the narrowest of margins, the Peugeot takes a deserved win.

Peugeot RCZ the French company has created a car with serious driver appeal. A slick gearbox, great handling and tuneful engine make the new RCZ a delight to drive. We’re keen to see how it copes on UK tarmac – but it’s cheaper, cleaner and better equipped than the TT.

Audi TT Coupe Striking TT is a class act, and the arrival of the Peugeot RCZ is unlikely to sway buyers who value desirability and image above handling thrills. For many, the premium badge will more than justify the price.

Volkswagen Scirocco The VW is a fantastic hatch that’s great to drive, stunning to look at and superb value. If you need to carry the occasional back seat passenger it’s the best buy, while standard adaptive dampers make it more comfortable than the RCZ.