The best new cars for under £500 per month

With a hefty £500 per month budget you can land a top sports car or premium SUV, the car world is your oyster 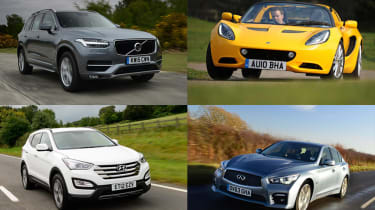 With £500 a month at your disposal, you’ll be able to make use of some excellent finance deals on some of the top sports cars, luxury vehicles and premium SUVs on the market today. What’s more, for your convenience we’ve collated the best deals around right here.

Finance deals are an increasingly popular method of buying cars, largely thanks to low prices and affordable deposits in dealerships throughout the land. The different deals vary considerably model to model, however. While a £41,000 BMW 5 Series requires a deposit of £5,999, a £63,000 Porsche Macan Turbo will need as much as £16,500 paid up front before you can drive away. It always pays to do the sums and shop around.

Interest rates can present a curveball too: 7.9 per cent APR on the Lotus Elise Sport isn’t a figure you can simply cast to the back of your mind when considering a thrilling, weekend driver.

All of the deals in the following list are Personal Contract Purchase (PCP) schemes, which require an initial deposit (unless otherwise stated) and a set number of monthly installments thereafter. At the end of the contract, you’ll have the option of paying a final lump sum for the car, using the vehicle’s remaining value to trade in for a new model, or simply hand back the keys and move on.

You’ll find our list of best cars for £500 on the top left of this page, or alternatively you can use the links below to find the best deals in other price brackets...