Honda Civic vs Focus and Golf

Can the new Honda Civic rocket to the top of the family hatch class? We test it against the VW Golf and Ford Focus 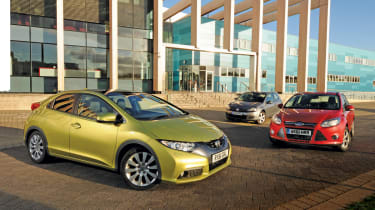 We’re only a couple of weeks into the New Year, and the battle to be 2012’s best family hatch has already started in earnest with the launch of the new Honda Civic.
The ninth generation has the same underpinnings as the outgoing Civic, but the evolutionary design hides a host of changes. More efficient engines, cleaner emissions and new suspension – designed to improve the ride – mean the car should be cheaper to run and more comfortable.
Better still, Honda claims the cabin has taken a step upmarket, while the clever folding rear seats are unaltered, ensuring practicality is as good as ever. Despite being lower and wider than before, the new car has familiar styling, and comes in six trim levels.
As before, there’s a choice of two petrol engines and the proven 2.2-litre diesel – and it’s the i-DTEC model we test against the best family hatches around. If the new Civic is going to be a contender at the top of this class, it needs to see off the Volkswagen Golf and Ford Focus.

Since 1972, more than 650,000 Civics have been sold in the UK. The question is, can the latest version continue the success story?

Honda set out to broaden the Civic’s appeal by refining rather than redefining its family hatchback. But while some criticisms of the outgoing car have been successfully addressed, not all the problems have been ironed out. Let’s start with the good bits: it’s quieter and smoother than before, plus it rides better, while the deep boot and clever rear seats ensure practicality is still a strong point. Cabin quality has improved, too – the trouble is, the layout is still complicated and ergonomically flawed. What’s more, the 2.2-litre engine lacks the in-gear response of its rivals.

The Civic is very clean, but neither as good to drive as the Focus nor as upmarket as the Volkswagen. It doesn’t have the class-leading edge in the areas that it needs to win this test – especially as the toned-down looks are likely to polarise opinion as much as the outgoing car. So our winner is the Golf – an accomplished all-rounder that’s good to drive, refined, practical and upmarket. It edges out the Focus, which is let down by its small boot and higher emissions.

WinnerVW Golf ★★★★★ The Golf is a rounded performer with a well laid-out, top-quality cabin. Composed handling, a decent ride and a punchy engine make it good to drive, plus the 2.0 TDI BlueMotion Technology is clean – we hit 43.5mpg on test. Cheap fixed-price servicing, strong residuals and low tax bills complete the package.

2ndFord Focus ★★★★ It's great to drive, rides well and has lots of room. Plus, the Focus is the cheapest car on test. Higher emissions make it a pricey company car, although we averaged a decent 44.4mpg. It’s close to the Golf on performance and the engine is refined, but a small boot and complex dash let the Ford down.

3rd Honda Civic ★★★ Third seems harsh, but the Civic is up against the best. It rides better than before, is quieter and more grown-up, yet rear visibility remains limited and the speedo is still obscured. Also, the engine isn’t as refined or efficient as rivals’. The Civic is better than ever, but it’s still no class leader.