It is no 'Moke'! But that has not stopped Italian coachbuilder Castagna tapping into the heritage of one of the most famous Minis ever 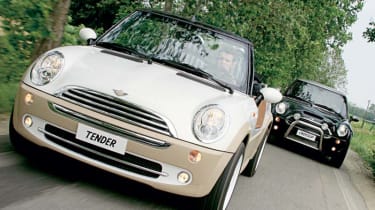 It's good to see the Mini Moke style is being explored once again. This spiaggetta (Italian for beach baby) is a purely indulgent third or fourth car for drivers with more money than worries. And Castagna's craftsmanship isn't to be denied. MINI should be closely eying these fun-mobiles, and stepping up to the plate with long-overdue body variations.

It is no 'Moke'! But that has not stopped Italian coachbuilder Castagna tapping into the heritage of one of the most famous Minis ever built to make the most of the summer sun.

Christened the Tender, the car was seen at this year's Geneva Motor Show alongside the new Crossup all-roader, and Auto Express is the first magazine in the world to take the wheel of both.

Based on the MINI Cooper S chassis, the models are powered by the engine from the 90bhp 1.6-litre One. The duo are aiming to follow in the wheeltracks of Castagna's previous MINI special, the Traveller-inspired SUWagon.

Incredibly, more than 30 SUWagons have been sold - a feat the Tender and Crossup are charged with repeating. However, there is no doubt that both cars are a lot more ambitious. Clever detailing gives the Tender's all-weather, all-terrain character an air of real luxury. Sleek, water-sealed teakwood lines the boot space, while 700mm has been added to the depth of the cargo area. There is a second storage bin for wet gear under the floor, and the interior fabric is mostly water-sealed and water- resistant neoprene as well.

The adventurous Crossup is a MINI interpretation of a Hummer H2T, and is meant for the mountain bike rider who does not want to leave a huge tread print across the interior when they head for the hills. Clever additions include an impeccably detailed exotic hide interior and pick-up bed at the back. Then there is the centre armrest that acts as a small refrigerator, plus the optional four-wheel-drive system to which you can add a hydraulic lift function for extra ground clearance. Oh, and there is a John Cooper Works exhaust, too.

Castagna already has several orders for fleets of Tenders from exclusive C�te d'Azur resorts. Further possible variations include a six-seater based on the MINI Convertible, along with an eight-passenger set-up that sees the wheelbase lengthened by 500mm. Another option is four load hooks at the corners of the top deck, making it possible to hoist the Tender onboard your yacht in Monte Carlo harbour.

Driving the Crossup is great fun, but with its roof and stiff suspension, it is little different from the standard MINI experience. The Tender, however, is in a league of its own. Make sure the weather is forecast to be rain-free, though, as putting up the cloth roof defeats the purpose of the car. Sky views and open sides make the cabin breezy but hugely airy. From the wheel, you almost feel part of the landscape. The seats are comfortable, although the vehicle's extra length does take some getting used to, particularly in town.

But while the driving experience is priceless, the cost is anything but. Starting with a base MINI One Convertible - although, of course, you could choose a Cooper or Cooper S - at £13,330, the price for this Tender treatment begins at around £13,500 and continues to climb depending on exactly what a client wants.

Castagna can easily handle right-hand-drive cars. Either send your own to Milan, or ask the firm to buy you a fresh UK-ready model and complete the project from scratch. Couldn't be simpler...