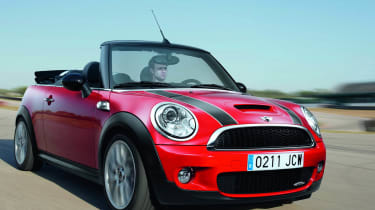 Meet the convertible MINI withmassive performance! These are the first official shots of MINI’sflagship John Cooper Works drop-top ahead of its world debut at theGeneva Show.

Already available in hatchback and Clubman bodystyles, customers can now enjoy the JCW in cabriolet form. And despite losing the roof, it’s lost none of its potency.

Theentire mechanical package is carried over from the hatchback, whichmeans the same 1.6-litre twin-turbocharged engine producing 208bhp and280Nm of torque, also fitted to the MINI CHALLENGE race car, is used.To cope with the extra grunt the transmission has been significantlystrengthened too, but incredibly it’s still capable of returning39.8mpg at the pumps, with CO2 emissions of 169g/km.

Performanceis a little down on the hatch, because of weight penalties fromstrengthening the chassis, but still sufficient to put most sportscars to shame. The 0-62mph sprint is knocked off in 6.9 seconds, and itwill keep accelerating all the way to a top spped of 146mph – a factwhich is recognised by the exclusive speedometer, displaying numbersall the way to 160mph.

And if the performance isn’t sharp enoughfor you, a sport button in front of the gear stick activates a bespokeengine map, which improves steering and throttle response instantly.

Tohelp get all that power onto the tarmac through the front tyres, anElectronic Differential Lock Control is fitted. It works in a similarway to Alfa Romeo’s Q2 system – by braking the spinning inside wheel tomaximise traction on the exit of corners.

Standard kit is muchimproved over the Cooper S and includes a unique Alcantara steeringwheel, figure-hugging sports seats and a glossy piano black interiorfinish. On the exterior there’s exclusive 17-inch cross-spoke wheels, asubtle bodykit and JCW badging on the boot, grille, brakes and doorsills.

Just like the rest of the MINI Convertible range, the JCWwill be built in Britain – the tailgate at the Swindon plant and therest of the assembly at Oxford. Priced from £23,470 on the road, thedrop-top hot-rod goes on sale in the UK from the 28 March.