Harder and faster version of the 911 will debut at Geneva 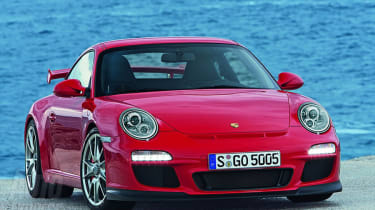 If you’re looking for more performance from the facelifted Porsche 911, don’t worry – the new GT3 is here!

Thetrack-biased version has a naturally aspirated flat-six engine whichproduces 429bhp. Performance is shattering, with a 0-60mph time of 4.1seconds, 0-100mph in 8.2 seconds and a top speed of 194mph. Stiffersuspension, more downforce, uprated brakes and lighter wheels shouldmake this the most focused 911 so far.

The car can also beordered with a hydraulic lift system for the front axle. This increasesground clearance for negotiating speed humps around town. The 911 GT3debuts at the Geneva Motor Show next month, and prices will start from£81,914 when it goes on sale in the UK in the autumn. Meanwhile, theBoxster is growing up! Porsche has only just revealed a faceliftedversion, but that hasn’t stopped engineers getting to work on anall-new model, due in late 2011.

Auto Express’ exclusive shotreveals the interior shares its look with the Panamera four-seater,with a large rev counter and new air vents. An increased track,repositioned wing mirrors and redesigned bumper will give the exteriora new appearance, too.