Spirit of legendary British luxury car maker lives on in son of Phantom... 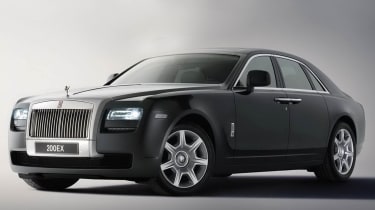 Feast your eyes onRolls-Royce’s new baby! These are the first official pictures of asmaller, more compact version of the Phantom that’s set to go on salein 2010, gunning for top-end versions of Mercedes’ S-Class and the Bentley Continental Flying Spur.

Making its world debut at the Geneva Motor Shownext week, the long-anticipated ‘baby’ Rolls Royce will be revealed inthe form of this thinly disguised concept car, which carries thecodename 200EX.

The EX tag has been used throughoutRolls-Royce’s history to denote almost showroom-ready ‘experimental’models – the Phantom carried the 100EX badge when it was revealed inGeneva in 2004, for example – and this newcomer continues that trend.

Beingthe fourth Rolls Royce to be unveiled since the firm was taken over byBMW in 2003, it’s internally referred to as RR4 –but it could resurrectthe famous Silver Ghost name when it arrives in two years’ time.

As you can see, the 200EX takes much of its visual inspiration from the Phantom with overhangs that are short at the front and long at the rear.

TheRolls Royce grille takes pride of place, bearing the Spirit of Ecstasyand flanked by rectangular headlights, while details such asrear-hinged ‘coach-style’ doors and a tapering tail are replicated too. However, look closer and you’ll see that the grille is slightlydifferent. “We wanted this to be less reminiscent of the traditional‘Parthenon’ style and more like a jet intake,” says chief designer, IanCameron, so the sides are curved inwards and the vanes set back intothe opening.

The narrow headlights are LED units too while thecircular lower spotlights, as seen on the Phantom, are blanked off. TheA-pillar is also more sharply raked, there are larger uninterruptedsurfaces and the roof is lower, all creating a simpler shape. The 200EXis painted in Darkest Tungsten, contrasting with the silver satinfinish applied to the bonnet and A-pillars. Vast 20-inch seven-spokewheels complete the look.

Sitting on a heavily modified platform shared with BMW’s latest 7-Series,the 200EX may be smaller than the Phantom, but it’s not what you’d callcompact. At 5.4m, it’s longer than the BMW 750iL by almost 19cm and isjust 44cm shorter than the Phantom itself. With a wheelbase of nearly3.3m – against 3.2m for a BMW 750iL – there should be ample legroom inthe rear for passengers.

Under the bonnet lies a new enginethat’s unique to the 200EX. Developed from the Phantom’s BMW-sourcedV12 engine, the unit measures 6.0-litres rather than 6.75-litres and isexpected to produce around 450bhp and 600Nm of torque – compared to thePhantom’s 460bhp and 720Nm. Even weighing over two tonnes, that should be enough punch for a 0-60mph time of around six seconds and a top speed of 150mph.

Inside, the 200EX is designed to be contemporaryyet luxurious with the finest leather and wood veneers used throughout.The dashboard has been simplified for an uncluttered look and a newinnovation is the ‘roller-ball control’ on the centre console, which issimilar to BMW’s iDrive and allows the driver to access many of thecar’s systems through a mouse-like rotating ball.

“The 200EXis a modern execution of timeless Rolls-Royce elegance, breaking withsome areas of tradition but retaining the core values that make ourmarque unique,” explained Rolls-Royce CEO Tom Purves. “We expect themore informal, agile design to broaden the appeal of Rolls-Royce MotorCars, attracting people who appreciate its fusion of refinement, newtechnology and contemporary style.” No prices have been revealed as yetbut expect the 200EX to start at around £180,000.