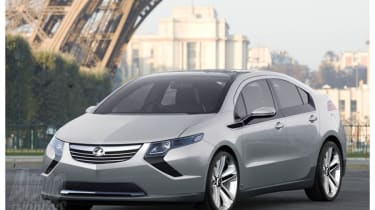 Say hello to the Ampera - an all new Vauxhall that's set to lead the British firm's charge into the electric car market.

Officialdetails are still scarce – the only picture of the Ampera is thisOpel-badged example – but Auto Express has learned that it’s powered byGM’s groundbreaking electric propulsion technology, called Voltec.

The drivetrain debuted in the advanced Chevrolet Volt, and uses an advanced lithium-ion battery. Thisalone can power the Ampera for short trips of less than 30 miles, afterwhich it can be charged via a regular electricity socket.

Vauxhallhas confirmed that the five-door, four-seat machine will be revealed atthe 2009 Geneva Motor Show in March, before being readied forproduction some time in 2011.

According to sources close to the project, the car could be built at the firm's Ellesmere Port factory, alongside the next generation Astra.

GM’sground-breaking electric propulsion technology, called Voltec, operatesdifferently from other advanced propulsion systems. For short trips upto 60 km, the Ampera will run only on lithium-ion battery power chargedvia a standard 230v outlet. For longer distances, the car will continueto drive on electricity that is generated by a small internalcombustion engine.

The Ampera will be well-suited to the dailydriving schedule of most British customers. It's reckoned that as manyas 80 percent of UK drivers travel less than 30miles a day.