BMW enters a new niche with a stunning hatchback version of the 5-Series! 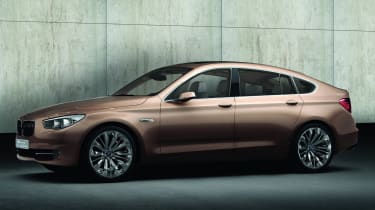 It’s official – the BMW 5-Series is hatching out! This is theall-new Gran Turismo, a striking hatchback crossover that will sit atthe very top of the new 5-Series range when sales start later this year.

This almost showroom-readyconcept will make its worldwide debut at the Geneva Motor Show inMarch, with the finished article arriving in the UK in October, pricedat around £40,000. And BMW bosses hope it will attract new customers tothe brand.

“The conventional saloon has been around since thecar industry started so perhaps now is the time for something new,”said BMW board member Ian Robertson. “The Gran Turismo fills a newniche and is an appropriate alternative to an SUV.”

Atthe rear, there’s a steeply sloping coupe-style roofline with X6-styletail-lights, while all the doors feature pillarless windows. Thetailgate is similar to Skoda’s twin-door, first seen on the Superb,although BMW maintains that it has been developing the boot concept fora number of years.

It can be used as a hatchback, or like asaloon with just the lower section opening up. Two buttons under thebootlid allow owners to switch between the two modes.

Inside,the concept has ample seating for two rear passengers. Each chair ismounted around six inches higher than in a regular 5-Series, and can beindividually slid backwards and forwards. The seat backs can tilt too.A body length of five metres, a long wheelbase and wide rear doors aidaccess.

“The Gran Turismo is easier to get in and out of thaneither an SUV or a saloon,” explained Chris Bangle, who was present atthe Munich unveiling in his final capacity as BMW design boss. “But ithas more rear seat space than a 7-Series. This is a car that has beendesigned from the inside out with rear passenger room similar to thatin first class air travel.”

Up front, the driver and passengeralso sit higher than they do in a regular 5-Series while Bangle’sdesign team has brought in a new dashboard with a more prominent centreconsole that’s covered in high gloss piano black material.

Therear seats also fold down and thanks to a removable bulkhead, theboot’s 430-litre capacity can be expanded to 1,650 litres, giving theGran Turismo the second largest carrying capacity in the BMW range,after the X5.

The production version will be offered with threerear seats, with the two-seater configuration of the concept availableas an option. The extended sunroof, which stretches over the rearpassengers’ heads, is likely to be carried over to the finished modeltoo.

BMW expects the Gran Turismo to account for 12-15 percentof 5-Series sales with around 2,500 models sold in the UK each year.Engines will mirror the next generation 5-Series line-up with the rangekicking off with 3.0-litre petrol and turbodiesel six-cylinderpowerplants.

Expect more powerful turbocharged V8s too, whileBMW is also likely to make a hybrid model available in 2010. Althoughbosses would not comment, it’s expected that the Gran Turismo heralds anew range of BMW models, which could be followed by a 3-Series flagshipwith a similar combination of style and practicality.