Outright pace is important, but so is economy. We rated both 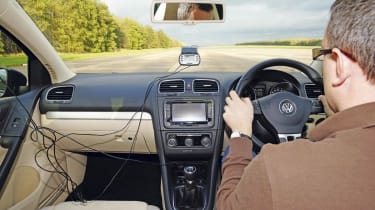 We all want the best of both worlds – but low-fat foods that taste good and frugal family hatches with strong performance are equally hard to come by!

Fortunately, the mid-sized family diesels in this test make a decent fist of combining these contrasting objectives. This explains why they’re such big sellers – but which model strikes the best pace/efficiency balance? Here we used claimed and real economy alongside the performance figures we measured at the track to rank our group of oil-burners.

Scan the headline stats and one stands out from the crowd. Despite being the second most expensive car here, the Astra has the smallest-capacity engine and the lowest power output. Its 1.7-litre CDTI boasts 123bhp and 280Nm of torque – considerably less than the 2.0- litre Ford, Skoda and VW.

The 2.2-litre Mazda and Honda units are in another league, but the Vauxhall should regain some of the ground lost here when we look at fuel economy.

Predictably, the Astra struggles to keep up against the clock. It takes 12 seconds to sprint from 0-60mph – that’s 2.5 seconds slower than the Golf. It’s just as far behind in-gear, signifying a real lack of mid-range punch. This is obvious when you drive the CDTI back-to-back with its rivals, as the other cars are so evenly matched. The large-capacity Mazda 3 and Honda Civic are the kings of the sprint, while the Focus has impressive overtaking punch. The VW and Skoda put in solid efforts, too, so the Astra is cast adrift on pace.

It’s not only power that determines how a car drives, but the way in which it’s delivered. Enthusiasts will love the Civic’s petrol-like willingness to rev, while the Skoda and VW TDI units are both satisfyingly punchy.

When it comes to economy, the Vauxhall fights back. It has the highest official combined claim of 60.1mpg, and while it couldn’t get close to this in our hands, it was comfortably the most efficient car on test.

A return of 49.6mpg gives the Astra a realistic touring range of around 610 miles from a single brim of its 56-litre tank – justifying its high finish in our standings.

Meanwhile, the punchy 2.2-litre Mazda raised a few eyebrows as the second most economical choice. Combined with its lively performance, this was enough to secure first place in this category. Third went to the Honda, with its powerful, smooth, fast yet thirstier i-CTDi.

There was little to choose between the remaining trio, but the Ford’s stronger mid-range thrust and superior real-world fuel economy saw it finish ahead of the VW Group pairing. And the Golf came out on top of this duo thanks to its higher combined economy.

After nearly matching the Skoda for real-world thirst and performance, its official mpg figure, which is the second highest here, proved decisive.

WHY: "Figures we recorded on the track were balanced with fuel efficiency to rate our six diesels"