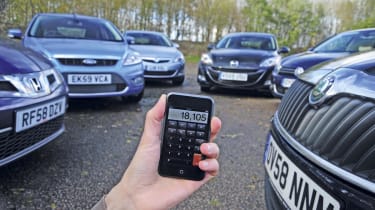 Get your calculators at the ready – because it’s no good finding the most attractive or dynamic family car around if you can’t afford to run it. Here we look at how much each of our models is likely to cost – by weighing up everything from its original purchase price and future residuals to running figures and equipment levels.

Top of the tree here is the Mazda 3. It has always been good value, and at £19,135 our Sport Nav is the second cheapest car on test. Despite this, it has standard sat-nav, climate control and Bluetooth phone connectivity.

Solid residual values with good economy and emissions also make it affordable to run. Following closely in the Mazda’s wheel tracks is the VW Golf. The German brand isn’t famed for providing great value, but this latest model is just that – thanks largely to its impressive residuals.

According to our figures it will lose £11,130 in depreciation after three years/30,000 miles – and that’s comfortably the lowest of all the cars on test.

In contrast, the Ford Focus’s value is expected to tumble by £13,554 over the same period, while the Vauxhall Astra is forecast to drop by £12,912.

Third in our standings is the Skoda Octavia. At £18,105 it is the cheapest model in our line-up – and it represents a lot of car for the money.

It loses ground with its relatively expensive servicing and weak predicted residual values, plus satellite navigation and Bluetooth are costly add-ons, at £1,540 and £690 respectively.

Next up it’s the Honda Civic. It is well equipped with a panoramic sunroof, climate control, sat-nav and Bluetooth all fitted as standard in new ES-T trim. However, heavy diesel consumption means big fuel bills.

The marque’s five-year maintenance package also counts against it here, because if you plan to keep your car for only three years, you end up paying for cover that you won’t be using. If you do expect to hold on to your motor for longer, though, the £830 deal is great value for scheduled servicing until 62,500 miles.

Behind the Civic is the Astra. Despite having the least powerful engine here, and one of the smallest load areas, the Vauxhall is the second most expensive car in our group, with a list price of £20,560.

Couple that with residual value forecasts of 37.2 per cent, and you can see where most of your money will go – because the Astra’s depreciation after three years/30,000 miles is the third worst on test.

Low emissions and impressive fuel economy look set to trim running costs, while servicing and insurance bills are par for the course.

Bringing up the rear in our value rankings is the Focus. The £21,245 Titanium is the most costly car here, yet comes with miserly standard kit and suffers severe depreciation. Ford does provide a three-year servicing deal for £563 – but otherwise the Focus is an expensive choice.