Which is the most practical choice here? We load each car to the max to reveal all 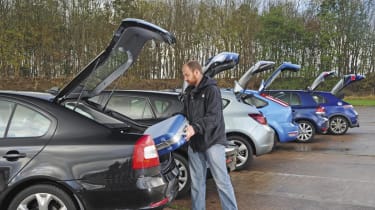 You can measure space and volume all you like, but if you want to see how practical a car is, there’s no substitute for loading up with luggage – so that’s exactly what we did.

A selection of suitcases of varying sizes and a soft holdall put each of our models to the test. Then we got out the tape measure to compare them, before having a play with the rear seats, to work out exactly how versatile their layouts were.

Even before we packed the first of our competitors, our testers knew which car would be the one to beat. The Skoda is the longest model, and although it sits on the same platform as the smaller Golf, it has the largest load capacity. In fact, the Octavia’s huge 560-litre boot is 75 litres bigger than the next largest – the Honda Civic. Not surprisingly, this proved to be conclusive, as the Skoda had more room to spare than any of the others here with all our gear loaded. Fold its rear seats, and it strengthens its position at the top of the practicality chart – it has a maximum load length of 1.88 metres, so is the best for carrying long objects.

The Civic scores in this area of our test with its ‘Magic’ rear seats. Not only do they fold flat, their squabs can also be tilted upwards to create a large load area behind the front seats.

Yet even with the rears in place, the Honda’s 485-litre bay is the second biggest here. Add a large, lidded underfloor storage area in the boot, and it’s no wonder bosses don’t see the need to offer a more versatile estate version of the Civic.

Separating the rest of our line-up wasn’t quite so easy – although our collection of bags and cases did highlight the fact that boot volumes tell only half of the story.

Look at the Vauxhall, for example. It offers a 370-litre boot, which you’d expect would mean a healthy advantage in this category over the Mazda 3, which has a 300-litre load area. But that didn’t prove to be the case. Once the bags had been loaded, the Japanese model offered more space for extra bits and pieces to be crammed inside. The versatility wooden spoon was destined for one of these two cars, and the Astra’s fate was sealed by its high load height and relatively restrictive boot opening. The fiddly split-level floor also proved more of a hindrance in the Vauxhall – it’s heavy to lift and tricky to stow out of the way.

Meanwhile, the 3 edged ahead with its flat-folding rear seats.

Neither the Golf nor the Focus is blighted by gimmicks. Although there’s no underfloor storage in either model, and the seats don’t fold flush, both these cars serve up a decent amount of space.

The Ford takes third place narrowly, on account of its slightly larger volume and wider opening. Although the VW has 58 litres more space with the seats folded and a longer maximum load length, it’s pushed down into fourth.