Does petrol coupé deliver on the promise of its looks? 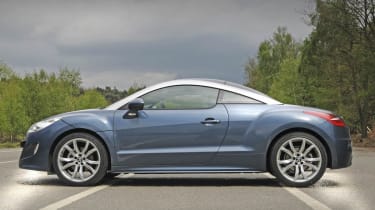 Swooping metal and glass give the coupé the appearance of a concept car. See one on the road, and its humped roofline and matching rear windscreen will have you wondering if it’s escaped from a motor show!

From side on and the rear, the RCZ looks unique. Bare metal windscreen pillars punctuate its profile and form a distinctive arch. From the front there’s no mistaking its Peugeot origins, though, as its gaping grille and pronounced nose are pure 308.

Even so, the ground-hugging shape and intricate 19-inch alloys give the RCZ GT a lithe, athletic stance that even the racy Mazda doesn’t replicate. And it makes the tall-riding Kuga and pert 500 look positively pedestrian.

On busy roads, the car commands attention, from interested Audi TT drivers and perplexed bystanders. Even if you drop the Mazda’s roof, you won’t attract as much interest.

It was always going to be hard for the cabin to live up to this. To be fair, designers have made the effort, but the interior doesn’t feel as special as it should. The steering wheel is too big for such a sporty car, and the switchgear doesn’t have the tactile quality of rivals.

But a few elements jar – notably the fiddly stereo, with its cheap, mobile phone-inspired buttons. Also, the back seats are purely decorative and too small even for a child safety chair.

Nevertheless, the interior retains the X Factor – and again, it’s due to the exterior styling, as the unique rear screen begins right behind the front seats. It provides an airy atmosphere and excellent rearward visibility, although it does ensure the cabin gets hot on warm days. Turn the key – there’s no racy starter button – and the 1.6-litre turbo sparks into life. It’s closely related to the MINI Cooper S and Citroen DS3 engines, and doesn’t disappoint, ensuring the RCZ delivers on the promise of its looks.

At the test track, the Peugeot covered 0-60mph in exactly eight seconds. That puts it on a par with the Mazda for straight-line pace, but it was faster in-gear than the drop-top, too, accelerating from 50-70mph in sixth in 11.1 seconds – more than a second quicker.

But the RCZ struggles to match the MX-5 on a twisty road, as it’s not as involving to drive. While the French car generates lots of grip and composure, the accurate steering provides little in the way of feedback.

It’s impressive rather than entertaining.

It turns into corners sharply and grips keenly, with the nose tightening its line as you lift off the throttle. But firm suspension affects ride comfort, especially at lower speeds. While it’s fine on smooth surfaces, where the RCZ glides along effortlessly, potholes send thumps through the cabin. And with standard 19-inch alloys, tyre roar is an issue on motorways.

We’ve no complaints about the sweet, short-shift manual box, though. It proves Peugeot can engineer a smooth action when it sets its mind to it, and the six-speeder also boosts fuel economy. We managed 30.1mpg on our varied test route.

Emissions of 155g/km are par for the course, and keep the RCZ’s running costs affordable. Style is more likely to dictate whether you buy a coupé, but low bills are key to the Peugeot’s appeal. The electronically adjustable pop-up rear spoiler and double-bubble roof only confirm the RCZ’s standing as a status symbol.

Chart position: 1WHY: Double-bubble roofline and curvaceous rear windscreen mark the new Peugeot out as something special. We’ve been impressed by top-spec car, but is the lesser THP 156 just as good?