When planning this road test we knew there was one car that had to be here: the Rover 214. 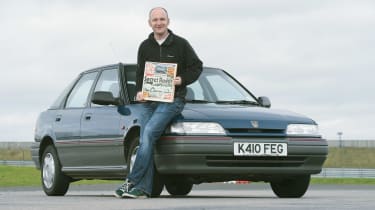 When planning this road test we knew there was one car that had to be here: the Rover 214. Rewind 27 years and 1,399 issues of Auto Express, and the British hatchback was our first-ever cover star.

Back then the Rover was still a year from launch, so our artist’s impression was based on spy shots. Looking at the renderings alongside the final production car, it’s clear we were spot-on. There’s the same chiselled profile, crisp lines and large glass area. It looks a little plain alongside today’s bold designs, but the 200 Series was a gamechanger. 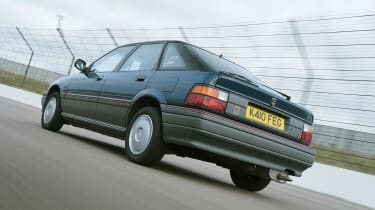 Designed in partnership with Honda, the 200 looked far slicker than its predecessor, and was powered by a new, lightweight 1.4-litre K Series. It was no surprise when the Rover went on to be a huge sales hit.

Even today, the 214 feels lively. This Si model is owned by former Auto Express staffer Craig Cheetham and has just over 30,000 miles on the clock, so the K Series is still smooth and eager, while the unassisted steering is direct and delivers decent feedback. Perhaps the biggest shock is the ride, which is as supple as many modern executive saloons’.

Rover is no longer with us, but hopefully cars such as this will still be going when Auto Express hits 2,000 issues. Of course, that will be a very different test.