If you’d said 10 years ago that BMW was going to produce a world-beating superbike, the nice men in white coats would have locked you up. 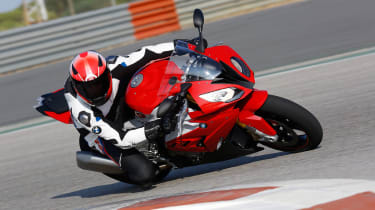 If you’d said 10 years ago that BMW was going to produce a world-beating superbike, the nice men in white coats would have locked you up.

You see, there was a time when Beemers were ridden by chaps with beards who hauled out their R80 once a year and took their faithful pillion to a damp campsite in Cornwall for their annual holiday.

Then the Long Way Round TV show came to pass in 2004, and you couldn’t go five miles down the road without passing a man of a certain age wearing a Rallye suit, riding a GS Adventure and imagining that he was Ewan McGregor.

So far, so slow; until those sneaky Bavarians stunned the biking world in 2008 by bringing out the S1000RR, a sexy 179bhp rocket with a 999cc inline four engine, to compete in the 2009 Superbike World Championship.

The release of the roadgoing version in 2010 came with a clever YouTube video showing off its acceleration by pulling a tablecloth off a 20-seat dining table without disturbing the place settings and table decorations.

Today, its third generation is even more powerful and faster, but safer too thanks to infinitely variable but user-friendly adjustable electronic systems. These systems mean that everyone from a race ace down to an inexperienced rider can wring its neck in (relative) safety.

The engine now has 199bhp and a flatter torque curve, and there’s even cruise control and heated grips, so you can hurtle towards the horizon in comfort.