Some bikers who tried out earlier versions of the Kawasaki ZX-10 were later led away muttering that it had scared them half to death. 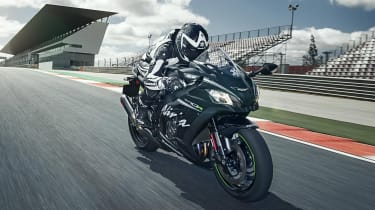 Some bikers who tried out earlier versions of the Kawasaki ZX-10 were later led away muttering that it had scared them half to death. But not me. For me, it was a lot more frightening than that.

It was, I imagined, a bike favoured by jet fighter pilots who didn't get enough excitement from the day job. This was, after all, a bike which did 100mph in first gear. A bike with 186bhp, or close to 200 if you boosted it with the Ram Air pressurised intake system.

That was an absurd amount of grunt on a machine that weighed a mere 192kgs wet, especially one so twitchy that it greeted any rough road surfaces by leaping about like a demented ferret, and made you feel that unless you got your line and speed right in every single corner, you'd end up in a tree.

Thankfully, in the current ZX-10R Ninja version, the twitchiness has been tamed by a nice Öhlins steering damper, a more stable suspension and chassis and an incredibly smart electronics safety net which makes high-speed cornering safe and effortless.

The bike has a bigger airbox and more free-revving engine than before. As a result mid-range acceleration leaves you with an insane grin on your face as you surge up to warp speed.

The ultimate evolution of 32 years of Ninjas, the Kawasaki ZX-10R Ninja is one of the biggest adrenalin rushes you will get on two wheels, but now without the uneasy feeling that the Grim Reaper is riding pillion.