The 7 at 60: celebrating the iconic Lotus and Caterham Seven

To celebrate over 60 years of the Seven, we take a special edition to the set of the show that made it famous 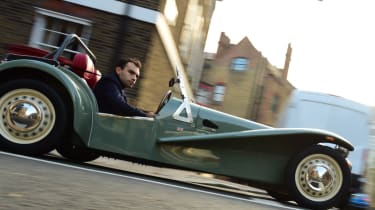 Early Monday morning, London. It’s a crisp start and I’m circling Parliament Square for what seems like the 18th time, just to bag that ‘perfect shot’. We’re causing quite a stir: cyclists give us a wave, taxi drivers wind down their windows for a chat and even some Japanese tourists are momentarily distracted from their guided tour of Westminster Abbey to take photos of us.

In hindsight it was only to be expected. I’m dressed in a dark blue blazer and sitting in a pale green open-topped sports car with cream wheels, red leather seats and a wooden steering wheel. It’s an impossibly old fashioned image, but I’m keen to press on with as little fuss as possible, because we have a tight schedule to keep to. I want to be in the hotel bar at our overnight stop 190 miles away in Oswestry, Shropshire, before it gets dark.

The idea seemed such a good one: 2017 marked the Seven’s 60th birthday, so why not go on a road trip? Better still, why don’t I tie it in with the 50th anniversary of the cult sixties television series, The Prisoner? 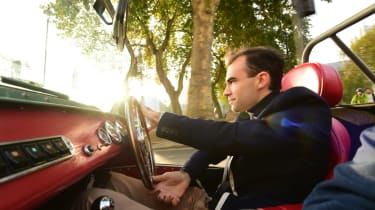 Older readers will know the legendary programme used a Lotus Seven because of its rebel image. It centered around ‘Number Six’, played by Patrick McGoohan, resigning from his Government job and ending up being trapped in a strange place called ‘The Village’.

It’s to ‘The Village’ we’re heading, but before we leave we take some pictures at 1 Buckingham Gate, a grand neo-Georgian house where Number Six lived. In the sixties the camera crew could get a clear shot of McGoohan climbing into the Lotus Seven, but half a decade later we struggle to find space outside the house among all the Range Rovers that have clogged up this part of Westminster.

We then start heading out of the capital. It’s here, sharing road space with new Routemaster buses and overly large SUVs, where the Caterham Seven Sprint feels particularly small. Still, it does make for quite swift progress because the two-seater can just sneak through even the smallest of gaps in the traffic. 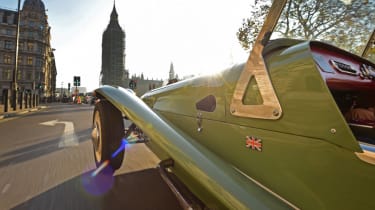 Despite its obvious Italianate design and the sense it’s located in a different country, The Village is actually Portmeirion in Gwynedd, North Wales, and that’s our final destination. But that’s tomorrow’s treat; today it’s about covering the miles, so the path of least resistance is chosen. A commuter’s cocktail of A40, M40, M42, M6, M54 and A5 is the quickest route, so the Seven’s polished chrome headlights are pointed in that direction.

The Seven Sprint is the perfect car for the anniversary trip. It’s the first of (so far) two special editions to mark the Seven’s 60th birthday; limited to just 60 cars, it sold out in seven days. And it’s not hard to see why.

The details are simply gorgeous, from the retro body colours (our car’s Camberwick Green is the prettiest), grey powder-coated chassis, cream wheels and red leather seats to the wooden Motalita steering wheel, spare wheel attached to the boot and the old-style Caterham badges. 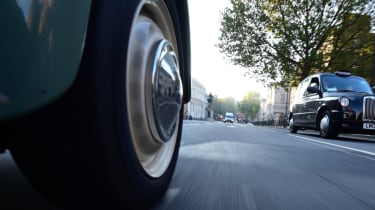 What’s more, it’s the closest I can get to feeling like Patrick McGoohan. The changes over the more modern Caterhams may be small, but they add such a period feeling to the little sports car.

You peer through an upright windscreen, glance at the fragile-looking windscreen wipers and out over a long bonnet that ends with the chrome-covered headlights.

All the time you’re gripping a cold wooden steering wheel that shields old-fashioned Smiths white-on-black dials. It’s as far removed from the modern car as it’s possible to get. Halfway up the M40, however, and the sanctuary of a modern car seems so appealing. Up to now it’s been top-down motoring – in London even the doors were off for that authentic sports car experience – but the constant buffeting from the wind means it’s time to put the roof up. Or, indeed, on.

Twenty minutes later and the interior is warmer, but the grim reality of driving a Caterham on the motorway is still ever present. Other car drivers, not to mention foreign-registered HGVs, simply aren’t expecting to see a tiny little Caterham on a busy motorway. That explains the many near-misses. It’s not just the size that makes a Caterham unpleasant on the motorway; it’s also the comfort. Nobody expects it to be a relaxed cruiser, but a sixth gear would be nice just to give my eardrums a break, and so, too, would seats with a bit more padding in them. As we arrive at our overnight stop, the realities of driving a Caterham for nearly 200 miles are all too present.

But the Caterham has never been a comfortable car; that’s simply not what it was designed for. The story goes back to the late forties with Lotus founder Colin Chapman modifying his own Austin Seven for competition. 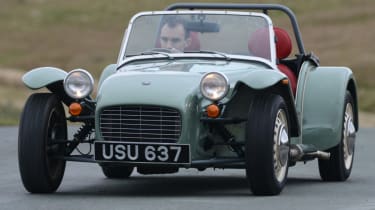 Various Lotus models subsequently resulted, but the Seven arrived in 1957 complete with its steel spaceframe chassis covered with unstressed aluminium panels, and a collection of Austin and Ford parts. The original cars were sold as CKD kits (Complete Knock Downs) to get around tax laws, and over the years it was lightly updated with better engines and more refinements. By the early seventies, however, new laws meant the Seven had to be sold as a fully built car; throw in the fact that by now, especially in ungainly looking Series 4 form, the Seven was distinctly unfashionable, Chapman chose to pull the plug.

The story would have ended there if it weren’t for Lotus dealer Graham Nearn. His Caterham Cars garage in Surrey had become the place for Seven sales and repairs, and over the years Nearn tried numerous times to acquire the rights to build the car. In 1973 he succeeded and started to build the Seven again, but in earlier and prettier Series 3 form and the tale continues to this day. You could say today’s model range – book-ended by basic 160 and mad 620R – is a far cry from the Lotus days. That’s a statement that’s ripe for argument, but one for another day, perhaps.

Next day and it’s even crisper. A few more miles of dual carriageway and then North Wales opens up – at first its distinctive cottages begin to line stone-walled roads, which then transform into rolling hills around lakes and through forests. This is Caterham country; save for a few locals in their battered Toyota RAV4s, the roads are empty. 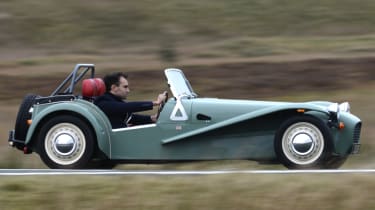 The Seven Sprint is based on the 160, so there’s a live rear axle, thin little 155-section tyres, short-throw five speed box and a 660cc turbocharged three-cylinder Suzuki engine. With this car it’s all about keeping the pace up and it’s not hard to get into an addictive rhythm of straight-lining flowing corners and heel-and-toeing for the tight ones. The Seven is so delightfully responsive and apart from the chirp and whistle from the three-cylinder turbo, this could be 1967 and Patrick McGoohan all over again.

After several miles of rolling hills and empty tarmac, the outskirts of Gwynedd hove into view. Signs for Portmeirion are here and there; follow them and you end up in the most bizarre little town. Designed and built by Sir Clough Williams-Ellis between 1925 and 1975 it’s a village haphazardly arranged on the edge of the North Wales coastline. It’s made up of Mediterranean-looking buildings and was the place where Number Six was imprisoned with the intention of extracting information out of him.

Even 50 years on The Prisoner is still hugely well known here. A number of times people wanted to have their photo taken with me dressed as Number Six and the car. But almost as quickly as we arrived, it’s time to leave and London’s bustling metropolis seems a long way away. As Number Six would say: “Be Seeing You.”

The story of the Lotus and Caterham Seven 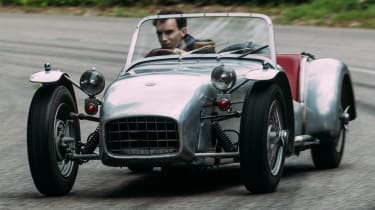 This is where the story officially starts. Lotus founder Colin Chapman first toyed with the idea of lightweight competition car in 1946 with his Austin Seven. Various Lotus cars culminated with the Seven in 1957. Sold as a kit, it used a medley of Ford and Austin parts. 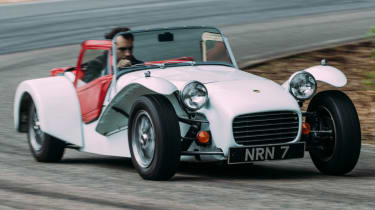 SS stood for Super Seven and the first model was the Series 2. These were the most powerful versions and used a Coventry Climax engine. The Series 3 Seven didn’t have an SS until 1969, and it used the eight-valve 1.6-litre engine from the Lotus Elan. It was a great success. 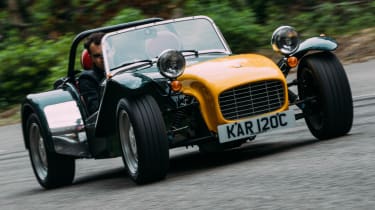 This is where the Caterham story really develops as the late eighties models drew a line from the Lotus versions. VVC cars used a 1.8-litre Rover K Series and introduced a raft of refinements, topped off by the Prisoner special edition, dressed in green with a yellow nose, just like the original TV car. 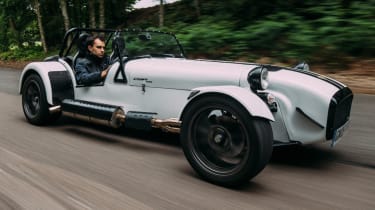 It may look like a normal Seven, but the CSR had a steel tubular spaceframe chassis incorporating the dash, centre console and transmission tunnel to make it stiff. There was double-wishbone suspension at the rear, and a 2.3-litre Cosworth-tuned Ford engine up front. 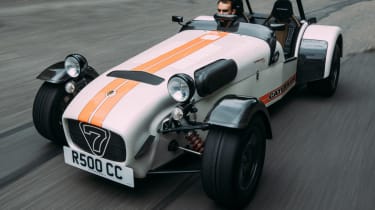 Probably the maddest Caterham ever, the Superlight R500 had carbon fibre bodywork, Kevlar seats, a 263bhp four-cylinder 2.0-litre engine, a limited-slip diff, a six-speed sequential gearbox and no windscreen. It was as extreme as Caterhams get. 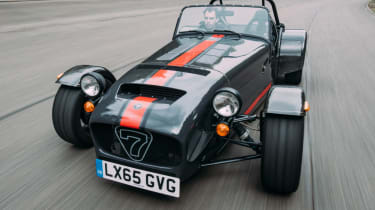 The craziest products in the current Caterham range are the 620 models; there’s this S version and the harder R. As well as an incredible power-to-weight ratio of 516bhp per tonne, you get a snappy nature that’s a far cry from the original Lotus Seven of 60 years ago.

Which is your favourite Seven? Let us know in the comments below... 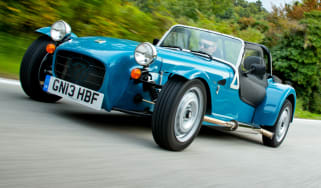