Back-to-basics Citroen Berlingo Multispace will appeal to some, but for most it will feel too old-fashioned 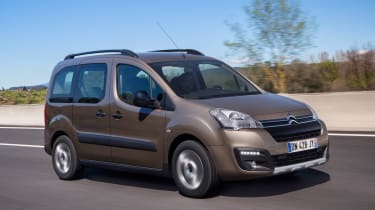 Much like the Peugeot Partner Tepee, this facelifted Citroen Berlingo will only really appeal to a select group of people. It’s spacious, versatile and cheap to buy, but there’s no ignoring the fact that modern MPVs are better to drive, boast better quality interiors, and offer almost as much space inside. Unless outright practicality is your number one priority, we’d spend a little more and buy a Citroen C4 Picasso.

We've already driven Peugeot’s facelifted Partner Tepee, but not wishing to be outdone, sister company Citroen has given its near-identical Berlingo Multispace a similar mid-life refresh to try to tempt conventional car buyers away from mainstream MPVs.

Visual changes over the old car are minimal, but include repositioned LED daytime running lights, a new front bumper and widened grille. There are two new colours – Cumulus Grey and Moka Grey – and a redesigned cabin with two new upholstery options. From November Active City Brake will also be added to the options list.

Inside it’s as practical as ever. All but the basic Touch model get an overhead storage shelf ahead of the driver, while features such as under-seat storage and the handy split tailgate remain. You’ll need to spec the £850 Family Pack if you want seven seats (frustratingly only available with the BlueHDi 100 engine), but you can remove rows two and three entirely when not in use. 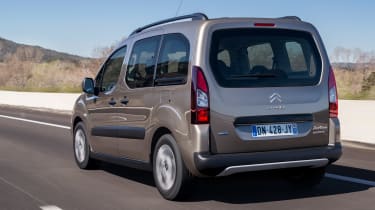 Quality is fine, but the Berlingo makes the more modern C4 Picasso look like a Rolls-Royce in comparison. There’s no hiding its commercial vehicle roots, with the upright driving position, scratchy plastics and sliding doors making even this Multispace version feel much like the van on which it is based.

From November, you’ll be able to spec a Mirror Screen infotainment system – allowing drivers to stream the contents of their mobile phone onto the seven-inch colour display – but this isn’t enough to push the Berlingo upmarket. If soft-touch materials and an ergonomically designed dash are important to you, look elsewhere. 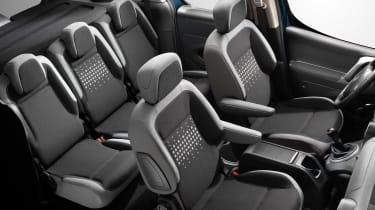 Due to Citroen’s bizarre spec restrictions, our range-topping BlueHDi 120 XTR only featured five seats. Space in the second row is good, with loads of headroom and decent enough knee room, while the boot measures an impressive 675 litres, which is the same as the Peugeot Partner Tepee and 204 litres larger than a Ford C-MAX. Take them out and you’re left with a cavernous 3,000-litre load bay.

Spec the excellent Modutop roof and you not only benefit from the light and airy glass roof, but Citroen also claims an additional 170-litres of storage overhead. It’s a £700 option on Feel and XTR models, and well worth the extra cash.

Standard kit on our top-spec XTR includes 16-inch alloy wheels, rear parking sensors and that seven-inch touchscreen, as well as cruise control, electric front windows and the All Road Pack, which adds raised suspension, underbody protection and the Peugeot 2008-style ‘Grip Control’ with different settings for sand, mud and snow. 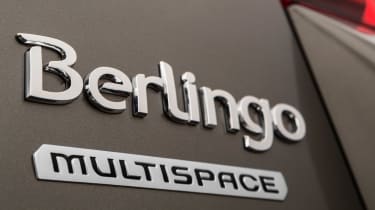 But while no one would argue the Berlingo wasn’t great value for money, on the road the Berlingo really falls down. The heavy steering and awkward driving position make manoeuvring a chore, while the tall, upright body means there’s loads of roll on twistier roads.

The new BlueHDi 120 engine has plenty of torque, but it’s gruff and unrefined – a fact only emphasised by the lack of sound deadening. The six-speed manual is easy enough to use, but less precise than the one you’ll find in a Volkswagen Touran, while fuel economy of 64.2mpg is respectable, if not quite as good you’ll get from a Renault Scenic dCI 110.