With a fresh, funky approach, the new Citroen C3 aims to shake-up the supermini market and its key rivals should be worried 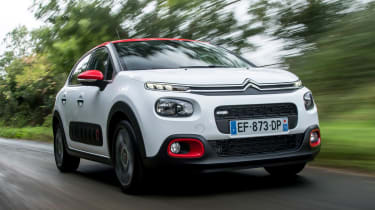 The new Citroen C3 is a very easy car to fall in love with. It may not be as good to drive as a Fiesta or as classy as a Polo, but it has something that’s been missing in the supermini market – spirit. It’s fun to look at and be in, has all the tech you could want and is good value to buy and run. Citroen is well and truly on a roll.

Citroen has a history of building small cars with bags of character - just think of the AX, Visa and Saxo. However the C3 fell off the wagon, and is set to blend into history as one of a series of forgettable French cars.

The all-new C3 is a return to form for the French brand, though. It offers up something different to the established competition, focusing on areas not really covered by the best-selling Ford Fiesta, Volkswagen Polo or Vauxhall Corsa - a unique mix of Gallic style, cutting-edge technology and the comfort we remember from Citroens of old.

But according to the French brand, the comfort aspect is more sophisticated now than in the old cars. It's more than just a pillowy ride - it's a whole ethos, named 'Citroen Advanced Comfort' and considers not just ride but visibility, ventilation, connectivity and usability. 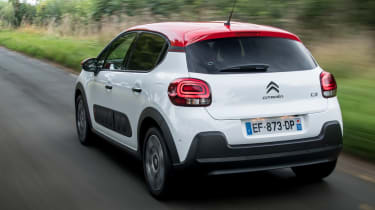 So the new Citroen C3 is full of easy to use features: the 7-inch touchscreen now works with the precision of a top-end tablet computer rather than a petrol station special, the view out is good from all seats, the boot is one of the biggest in the class and easy to get to, and even the door bins are painted white to make them easier to see (and look better).

There’s also a world first built-in dash cam on top-spec Flair models (optional on mid-spec Feel) that has all the safety benefits of regular dash cams but with added social sharing – through an app, of course – and no wires. It's a really valuable addition and one that we're surprised didn't crop up sooner.

This is still a supermini, so space in the back seats is just about good enough for family use, but not super-generous. Yet this is a car with a sense of charm and character that will help you overlook the few flaws it has – like some of the plastic quality around the dash.

The spirit of the Citroen Cactus is clear, from the smaller airbumps down the sides (with snazzy colour inlay) to the strap door pulls. The minimal dashboard is dominated by the touchscreen and there are colour inlays that add to the car’s funky feel.

If you get a kick out of spending time inside, you’ll get an equal thrill checking out the car on your driveway. Narrow LED driving lamps sit at bonnet level, swooping around the front and into the grille with Citroen’s double chevron logo. Inset lower down are the headlights, either side of a wide-mouthed grille.

Things are rather pert at the back, too, while there’s the option of red, white or black contrasting roofs that look great. 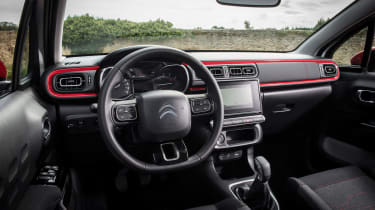 So there’s no doubt about the showroom appeal, but does the car deliver on the road? In spite of the new C3 sitting on an old-tech platform, Citroen’s engineers have given the car a gait that sits nicely between relaxed and sprightly. It’ll not have you screwing your eyes up as you go over bumps, nor will it have you eager to string a series of bends together.

We drove the award-winning 109bhp 1.2-litre three-cylinder engine – its cheeky nature is perfectly in-keeping with the new C3 with decent performance, an engaging engine note and strong fuel economy (a claimed 61.4mpg). 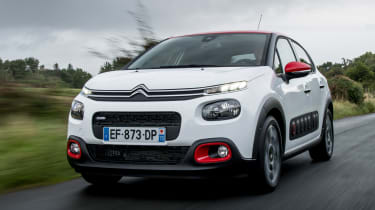 So for all that, it’s going to be expensive, right? Wrong! As the Ford Fiesta moves further up market, the C3 is reassuringly affordable, starting at £10,995 for a 67bhp 1.2-litre Touch model with a reasonable smattering of equipment. Ignore the diesels – they’re not as nice to drive and difficult to justify the extra cost – but our top-spec Flair model cost a still reasonable (given the amount of kit on board) £15,995. The sweet spot may well be the 81bhp version of the three-cylinder engine in Feel trim for £13,745 – not far from the price of an entry-level Fiesta these days.