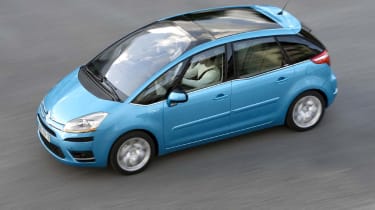 As with the Grand variant already on sale, the five-seat C4 Picasso can rightly claim to be the most desirable MPV in its class. And it’s arguably the best car in the entire Citroen line-up. The spacious, innovative cabin plays to the brand’s traditional strengths, while the sleek styling makes its rivals look staid in comparison. High standard equipment levels, a strong Euro NCAP crash test result and keen pricing should see to the rest.

All the best things come in small packages – particularly when it comes to people carriers.

Take Citroen’s new C4 Picasso, for example. We’ve been greatly impressed by the seven-seat Grand version, but is the latest five-seat model even better?

On design alone, class rivals such as the Renault Scenic and Ford Focus C-MAX are at a serious disadvantage compared with the stylish newcomer. Viewed from nearly any angle, the Citroen looks sleek. Big alloy wheels add a touch of aggression, while a clean design, short overhangs and the arching roofline trump its rivals for kerb appeal.

The distinctive waistline and sloping tailgate also help to distinguish it from the more practical seven-seater. However, fans of the full-sized Picasso will be pleased to see that the larger model’s trademark panoramic windscreen has been carried over, which is great news. The cabin is bathed in light even on dull days, and that is sure to appeal to kids.

Inside, forward visibility is decent, thanks to the slender A-pillars. There’s no traditional centre console bet-ween the front seats – and the instruments are positioned in the middle of the dashboard, beside the neat fixed-hub steering wheel.

The baby Picasso is 12cm shorter than the Grand, but there’s still an impressive 500 litres of boot space beneath the load cover in the back.

However, if you slide the second row forward, capacity rises to 605 litres. And should that still not be enough, you can fold each of the three individual rear seats flat easily to create a van-like 1,734 litres of room. Head and legroom are excellent in the back, despite the gently tapering roofline.

On the move, the Citroen isn’t as involving as the likes of the C-MAX, but the handling is more car than MPV-like. Those big alloys aren’t enough to prevent understeer if you carry too much speed into a tight bend. But it’s easy to drive, both in town and on the open road, while the supple suspension ensures comfortable progress. It soaks up bumps effectively, aided by the optional pneumatic rear dampers.

Up the pace and, with 320Nm of torque, the flagship 2.0-litre diesel powerplant we tested has ample performance to meet the requirements of most buyers. The Citroen covers 0-62mph in 12.1 seconds, but in-gear performance is lively and the self-shifter responsive. With its perceptive gear selections, the automatic box is rarely wrong-footed.

And the good news is that all this doesn’t cost at the pumps either, as the 2.0 oil-burner returned 38mpg. A 110bhp 1.6-litre diesel will also be available at launch.

Petrol power will be offered in the form of 127bhp 1.8-litre and 143bhp 2.0 motors to complete the range. In terms of transmissions, there’s the conventional automatic tested here and a standard manual. There’s also an automated manual option, which as with the self-shifter we tried, feat- ures steering-wheel-mounted paddles to control up and down changes.

When we drove this set-up in the seven-seat model it provided smooth manual shifts, but proved jerky when used in auto mode. Citroen is yet to announce what the final trims for British cars will be, although buyers can expect seven airbags, ESP stability control and cruise control as standard fit on all variants.

Options include a DVD player with screens built into the front headrests, plus the Modubox, a removable trolley with canvas bag that folds neatly into the boot. Prices for the new-comer are set to start at around £14,500, and it will enjoy stronger residuals than its Xsara-based predecessor – which will sell alongside it as a cut-price alternative.

A fine addition to the range, the five-seater is a capable and desirable compact MPV. Renault and Ford have every reason to be worried.