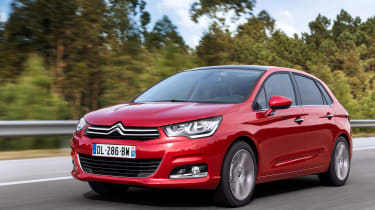 The changes Citroen has made to the C4 have failed to make the car truly competitive against newer rivals. The suspension is soft and the steering is vague, yet this top-spec Flair doesn’t feel as comfortable as it should. That said, this new diesel engine is very frugal, nicely refined and all models are competitively priced.

The Citroen C4 has always suffered at the hands of its competition. The family car class is a tough nut to crack, and while the French hatchback was never that bad, its rivals were always better built and more fun to drive. But now there’s an updated C4, complete with new engines, revised styling and extra kit.

It’s fair to say only those with a keen eye – or a penchant for modern Citroens – will spot the visual changes. Up front there’s a set of signature headlights with LED running lights, while at the rear the C4 gets a set of 3D-effect tail lamps. There are a pair of new colours – Platinum Grey and Spirit grey – as well as fresh 17-inch alloy wheel designs.

Inside, top-spec ‘Flair’ models like this one get a new seven-inch touchscreen lifted straight from the Peugeot 308, as well as new upholstery and a simpler dashboard design. The materials used are decent, though Citroen failed to bring the lesser ‘Touch’ and ‘Feel’ versions along for us to try, so we’ll have to reserve judgement on those until we’ve driven them in the UK. 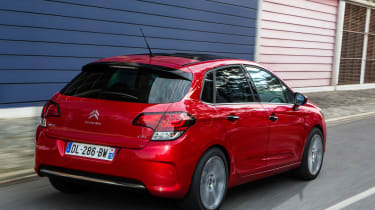 All cars boast air-conditioning, cruise control and hill start assist, while range-topping models get a DAB radio, Bluetooth and rear parking sensors. Prices for the basic ‘Touch’ models begin at just £14,645, which is around £2,000 less than a like-for-like Ford Focus or £1,500 shy of an entry-level Nissan Pulsar. That said, the cheapest diesel engine will add another £2,100 to the cost of a basic C4.

Out on the road, very little has changed. The updated C4 uses the same chassis and suspension settings as the old car, meaning it tends to wallow and feels loose in the bends, yet bumps and jolts on the motorway. This is due to the overtly soft setup being unable to react quick enough to deeper ruts in the road.

The steering hasn’t improved either. It feels unnervingly light at high speeds, offering little feedback when you press hard into a corner. Grip is good, but you’re never too sure where the front wheels are pointing – so you’re constantly adjusting the wheel mid-corner, which doesn’t inspire confidence.

That said, this new 118bhp diesel engine suits the car well. The six-speed manual gearbox is carried over, but helps make the 1.6-litre HDi feel refined yet punchy, returning as much as 78.5mpg with a light right foot. It’s a shame that adding the bigger 17-inch alloy wheels knocks it over the sub-100g/km tax-free CO2 threshold, but on the smaller rims it is quiet and smooth – with the light wind whistle proving more noticeable than any sort of engine roar. 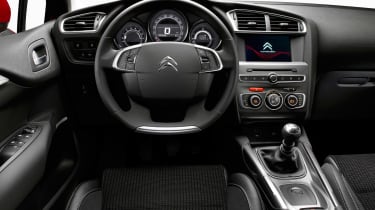 Practicality is unchanged, with some of the interior space sacrificed for a sizeable 408-litre boot. Room in the back is cramped, and six-foot passengers will struggle to stay comfortable behind a similarly-sized driver. Cubbies and door bins are plentiful, but expect the compromised glovebox to remain on right-hand-drive cars.

Citroen bosses claim buyers of the old car valued comfort and ride quality above everything else, and that these traits have been consciously enhanced for this car. Product manager Jean-Michel Marmiesse confirmed buyers seeking dynamic ability should look at a Peugeot 308 instead, but maintained those wanting comfort, space and quality will still find merit in the ageing C4.

The SEAT Leon remains a better car to drive, while a Skoda Octavia will beat it for outright space, but the C4 is keenly priced, and this new diesel engine is the pick of the range. What’s more, it’s likely to be available with some whopping dealer discounts, making it great for buyers seeking economical, good-value family transport. That said, the same is true of the quirky C4 Cactus – and in our eyes, that is by far the more desirable family car.