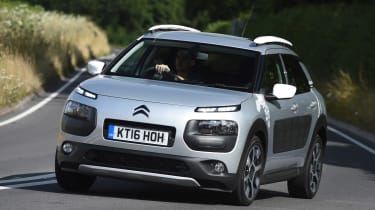 The C4 Cactus remains a genuinely interesting and unique alternative to the ‘same again’ crossover norm. It’s bold exterior is backed up by a funky and uplifting cabin, while the comfortable ride gives it real Citroen DNA. We’re not convinced the Rip Curl edition makes it notably more distinctive, however. It’s easier to appreciate the Cactus’s value lower down the range, too, while the petrol models are nicer to drive.

You may remember the Rip Curl name from another French brand’s special edition cars. Not too long ago it was Renault who was churning out Clios with the Australian surfwear company’s logos sprawled over them. But loyalties have clearly changed, as Citroen will now sell you a Rip Curl-badged C4 Cactus.

The crossover has been on sale for two years but remains arguably the boldest-looking crossover in its sector. The Rip Curl edition is based on top-spec Flair but costs an additional £500 – additions include natty graphics, silver skid-plates and white door mirrors and white roof bars. You also get smart 17-inch diamond-cut alloys and standard all-weather tyres.

Inside, cosmetic tweaks are limited to some bright orange seatbelts and speaker surrounds, but look closer and you’ll see Citroen’s ‘Grip Control’ selector has also been added to the Cactus for the first time. It gets five modes to let you flick between default, sand, snow or mud traction control setups ,or turn it off entirely (up to 30mph). Most buyers will probably find that they never even use it, but its useful to have in case the British weather does turn sour.

Still, the cabin is the same minimalist and practical design that makes it such a refreshing place to sit, with armchair-like front seats, a neat top-opening glovebox and a simple layout. There’s also plenty of kit. It’s not perfect, though: cabin quality remains patchy, the driving position is awkward for tall people and the all-important cental touchscreen is fiddly to operate. Weight (and cost saving) measures are easily found, too, including the rear windows that pop out rather than drop and the lack of any grab handles above the doors. 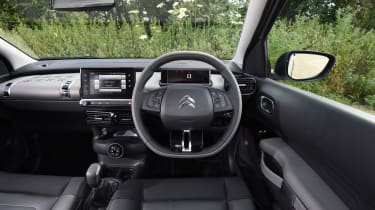 The wave-chasing theme of the Rip Curl doesn’t alter the way the C4 Cactus drives one jot. We tested the BlueHDI 100 diesel engine, which is frugal and strong but is hampered by a cumbersome, long-throw manual gearshift. The 1.2-litre turbo petrol is heavier on fuel but lighter and more in-keeping with the C4 Cactus’s fun demeanour, so it’s the one we’d pick.

Citroen has fitted the C4 Cactus with very soft suspension, which means a comfortable and refined ride most of the time. The larger alloys and light body means it can thump and bounce on really rough surfaces, however. Combine that with pronounced wallow in corners and accurate but feel-free steering, and it’s clear that there’s better-driving crossovers about.