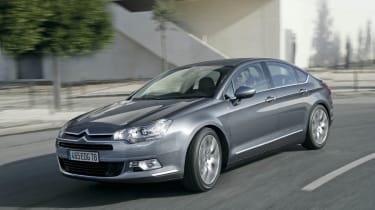 This new C5 is as desirable as the previous one wasn’t! Handsome, futuristic styling and an air of quality and calm make it a viable alternative to the German premium brands. Badge-obsessed buyers won’t see it that way, but that’s their loss. The Citroen is as comfortable and solid as many luxury cars, while its wide engine range also appeals. It can’t match the Mondeo’s handling, yet that won’t matter to those wanting a relaxing driving experience.

Let's face it... the old Citroen C5 was never the best family car in its class. It was good value, certainly, but even from launch in 2001 it trailed behind its leading rivals – never mind against the current crop of excellent models such as the latest Ford Mondeo and Mazda 6. And that’s why this new version is such a revelation.

The great-looking car represents the start of a new era for the French brand. And it lays to rest the ghost of the previous generation, which was afflicted from birth by its awkward styling and made to look cheap by heavy dealer discounts. The new C5 has the rounded, futuristic profile of the bigger C6, but with more sculpted flanks, while the tail resembles that of an Audi or BMW.

The concave rear window is a feature taken from the C6 and the old CX which not only appears typically Citroen, but also makes the boot opening bigger. This incarnation of the C5 really is a booted saloon, rather than a hatch trying to look like one. There’s a handsome estate, too.

Many of the underpinnings are also borrowed from the C6 and, to a lesser extent, the Peugeot 407. That means double-wishbone front suspension and a multilink layout at the back, as well as production at the Peugeot-Citroen plant in Rennes, Britanny.

Inside, though, the newcomer is quite different from its relatives. Bright metal accents and soft-touch surfaces feature throughout as Citroen strives to inject the C5 with the ‘prestige’ feel also achieved by Ford and Renault with the Mondeo and Laguna respectively. And there’s no wood, real or otherwise.

The instrument dials are similar to those in a Mercedes, with only the outer part of the needles visible and their centres taken up by information displays. There are additional modern touches on the steering wheel.

It has the fixed hub first seen in the smaller C4, so the controls for the stereo, trip computer and cruise control are located just a thumb’s span away from the driver. In the C5, though, the hub is covered with a thin membrane, which helps give the action of the switches a higher-quality feel.

Three petrol engines and four diesels are offered, although the 3.0-litre petrol V6 is unlikely to make the UK. Top-of-the-range Exclusive models get the Hydractive 3 Plus hydro-pneumatic suspension and its accompanying electric parking brake. This equipment will also feature on 173bhp 2.2-litre twin-turbo diesel VTR+ variants.

This engine and suspension combination gives the C5 a very relaxing driving experience – no doubt helped by the sound-insulating laminated side windows fitted on all models. There’s plenty of smooth, easy pulling power fed through a six-speed gearbox, and at speed the C5 has that unflustered, floating-on-fluid feel that is unique to Citroen. At low speeds its ride is more supple than the C6’s, and if you find the steering a touch light and vague, you can sharpen up the responses by selecting Sport mode.

We also tried a 138bhp 2.0-litre turbodiesel with steel springs. It’s not as refined, but still rides well, and its steering was more natural and precise. You get the feeling you’re driving a softer, quieter Peugeot 407, complete with that car’s excellent handling.

The idea of the steel-sprung C5 is a response to company fleet managers who didn’t see why they had to pay extra for complicated suspension that’s of no benefit to them. You can see their point. Overall, the C5 isn’t a sharp driver’s car like the Mondeo, but then Citroens of the past never have been.

The newcomer represents an intriguing alternative – it cossets occupants just as well as a premium-badged model costing twice the price. It’s a huge leap over its predecessor, and a true modern-day Citroen.