You won't find a Citroen badge on the new DS 5 but is the upmarket hatch good enough to suggest DS can successfully go it alone? 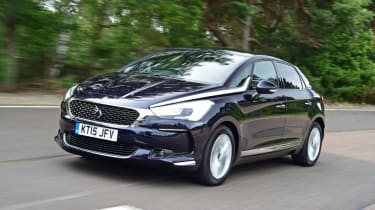 The fresh faced DS 5 is a worthy first effort from the new premium French brand. An upmarket interior, plenty of kit even on entry-level models plus the usual French car quirks make it a more appealing proposition than before. It’s stylish, economical and quiet to drive – and thanks to new suspension is more comfortable than before. However, equally desirable but more affordable offerings from rivals could prove too tempting for some.

DS split from parent company Citroen last year, but until now has continued to place its Chevron badging on the boot lid of all of its cars. This facelifted DS 5 is the first to go it alone, and now we’ve driven it in the UK for the first time.

Better still, it gets the same updated suspension setup as the 2.0-litre 150 we previously tested, giving it a much more composed ride than the old Citroen DS5. It’s a marked improvement, soaking up all but the worst lumps and bumps and feeling nicely refined on the motorway. 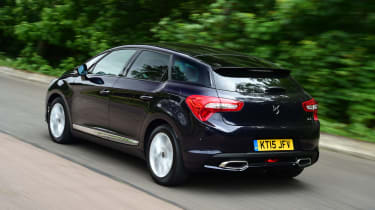 The steering wheel feels huge in your hands – contrary to sister manufacturer Peugeot’s shift to tiny, sportier wheels. But despite this, the DS 5 offers enough feel and feedback to let you know where the wheels are pointing without feeling overly heavy. It’s not a car you’ll particularly want to hustle down a B-road, but DS engineers are more than content with that – making it reminiscent of how old French saloons should be; comfortable and relaxing to drive.

That said, the DS is flexible enough in-gear, and happily picks up speed if you put your foot down in sixth-gear at 60mph. We reckon the larger 148bhp (BlueHDi 150) is a better all rounder, thanks to its superior pace and almost identical running costs – but this 120 will no doubt be the favourite among cost-conscious fleet managers and company car buyers. 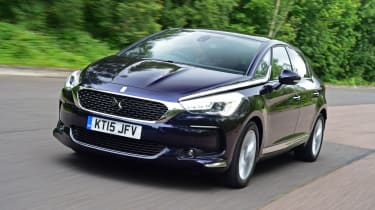 However, at this price point the DS 5 doesn’t stack up against its closest rival the VW Passat in SE trim. Both will return over 70mpg and emit less than 110g/km from a 1.6-litre diesel, but the VW is almost £1,500 cheaper, noticeably quicker and more rewarding to drive. That may not matter to some, but the DS is also slightly down on passenger space and the 465-litre boot is over 100 litres smaller than the Passat, too.

But the DS 5 is still a smart looking family car, visual changes over the old model include a softer corporate face and a pair of chrome strips leading from the headlights to the A-pillar, giving the car an altogether more upmarket appearance, and one that will roll out across each of DS’s six new models by 2020. It still looks a little awkward from the rear, but interior quality is good if not quite up to VW levels and a cleaner dash with fewer buttons is a welcomed change.