Uniquely styled diesel hybrid is a quirky but compelling choice 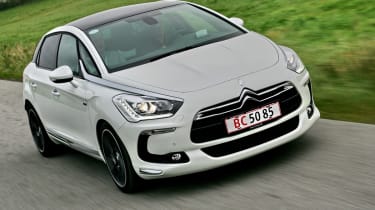 Nobody does radical cars like Citroen – and the DS5 is sure to rank alongside the DS, XM and C6 as another dramatic piece of design. But there’s more to this family car than eye-catching styling. It really feels luxurious, drives well and boasts impressive technology in the HYbrid4 system. If you like the stand- out styling and don’t baulk at the price, it’s a refreshing and well executed package.

It's not often that a new model arrives without any direct rivals, but the curious Citroen DS5 is just that. The flagship crossover sits above the firm’s DS3 and DS4 models and offers an alternative to premium cars such as the Audi A4 Avant, with a starting price of around £23,000. But is it too quirky for its own good?
See the DS5 in the flesh, and it takes several minutes to take in all the details, but once you do, the overall look works well. Chrome strips run from the headlights into the A-pillars, while the foglamps sit in cut-out ‘c’-sections framing the grille. At the rear, the black C-pillars make the roof appear to float over the rest of the body.

Video: Watch CarBuyer's video review of the DS5
[[{"type":"media","view_mode":"content_narrow","fid":"68829","attributes":{"alt":"","class":"media-image"}}]]
It’s just as innovative inside. The leather seats are designed to look like the links in a metal watch strap and feel very comfortable indeed, while the various switches and toggles are arranged on the centre console and above the driver’s head where a pilot would expect to find them. The driving position is slightly raised, and you get a good view out.
Up close, the DS5 appears quite compact, but in reality it’s only 30cm shorter than a Ford Mondeo Estate. There’s quite a lot of room in the cabin, and space for three adults in the rear, but tall passengers will find their heads touching the roof lining. The 465-litre boot is on a par with the BMW 3 Series Touring.
Engines include 1.6-litre and 2.0 diesel units with 109bhp and 163bhp respectively, and a pair of 1.6-litre turbo petrols with 153bhp and 197bhp. But the big news is the HYbrid4 version which we drove.
It’s Citroen’s first production hybrid, and features a 163bhp 2.0-litre HDi engine driving the front wheels, while an electric motor powers the rears. It makes up to 37bhp in Sport mode, for a total output of 200bhp and 0-62mph in 8.6 seconds, 107g/km of CO2 and nearly 70mpg. The only penalties are
a smaller boot – because of space taken up by the batteries – and the steep £30,000 price.
On the move, the HYbrid4 is impressive. You can run the car solely on electricity in ZEV mode for three miles at speeds of around 40mph, but even in Auto mode – when the vehicle swaps between the two power sources – the engine barely fires up in town.
Head for open roads, and the combination of the two means there is always plenty of punch for easy overtaking. A 4WD mode is handy for slippery conditions, too.
The DS5 handles pretty well. The electro-hydraulic steering is accurate and provides decent feedback, while there isn’t much in the way of body roll, either.
Our test car had 235/40 section tyres on huge 19-inch wheels, which meant there was lots of grip, but the ride was on the firm side. Go for 17-inch wheels and you’ll get sub-100g/km CO2 emissions, as well as 74mpg.
The DS5 certainly isn’t cheap, but it all adds up to a genuinely different and desirable family car.
Share this on TwitterShare this on FacebookEmail