We drive the new large luxury hybrid from Citroen - is it worth the high price? 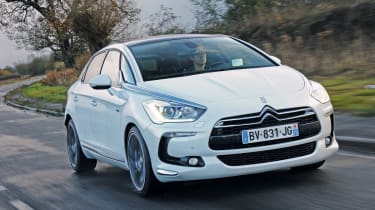 The DS5 is an incredible car to look at, has a fantastic cabin and boasts some impressive technology in the shape of a new, highly economical and very cheap to tax diesel hybrid drivetrain. Yet its stiff ride, jerky transmission and vague steering hold it back. As a result, it’s neither a sports saloon nor a soft and relaxing limousine. And although it’s very well equipped, that price tag puts it up against very talented and desirable rivals from premium brands.

You have to admire Citroen’s persistence. It has tried to grab the public’s attention with a large range-topping model many times – but no flagship since the original fifties DS has really hit the mark.
So can this latest interpretation do just that? The new DS5 is a luxurious, hi-tech crossover aimed at Audi A4, BMW 3 Series and top-spec Ford Mondeo buyers. It goes on sale in March, priced from £23,000, but that rises to £34,000 for the Hybrid4 model that we’ve tested here.
Video: Watch CarBuyer's video review of the DS5
[[{"type":"media","view_mode":"content_narrow","fid":"68829","attributes":{"alt":"","class":"media-image"}}]]
First impressions are good. The DS5 is one of the most striking cars to emerge from Citroen’s design studios. Those who remember the C-SportLounge concept from 2005 will be pleased that the company has effectively put that car into production.

It’s just as impressive inside, with a cabin unlike any other in the class. You sit quite high, surrounded by what seems like acres of soft-touch material. There’s a bank of switches overhead that control the individual sunroof panels and head-up display. Citroen says the DS5’s interior has been inspired by an aeroplane cockpit, and it certainly feels that way.
The seats are covered in watch strap- style leather, while aluminium and other metals are used extensively on the facia and doors. If it weren’t for the plasticky steering wheel-mounted gearchange paddles and below-par stereo switches, the dashboard would score top marks.
The DS5 is based on the smaller C4 rather than the larger C5 platform, and its 4.5-metre length falls between the two. At 1.87 metres, it’s slightly wider than the C5, yet it’s also taller (1.5 metres). These dimensions give the car its unique proportions, but they also result in some compromises. A six-foot-tall passenger sitting behind an equally tall driver will be cramped – there’s not much headroom or space under the front seats for feet.
In the Hybrid4 model, the battery pack and electric motor – which drive the rear wheels and sit at the back of the car – encroach on boot space. Conventional diesel and petrol DS5s have 468 litres of luggage room, but you only get 325 litres to work with in the Hybrid4.
However, the new powertrain offers many benefits. The combination of a 163bhp 2.0-litre diesel with an electric motor gives road tax-free CO2 emissions of 99g/km on cars with 17-inch wheels. That rises to 107g/km on models with 18 or 19-inch alloys. It’s also remarkably fuel efficient, capable of up to 74mpg (on the smallest wheels) and runs mostly in silent all-electric mode around town.
Flicking the centre console dial to Sport gives you the engine’s full 200bhp and plenty of torque, which gets the DS5 up to motorway speed with ease. 4x4 mode runs the two power sources together for maximum traction, while ZEV puts the car in full electric mode for as long as the batteries have charge – about two-and-a-half miles. In Auto mode, the car will swap between the two as needed.
The drivetrain isn’t perfect, though. The six-speed automatic gearbox is very jerky when changing up under full power, the steering wheel-mounted paddleshifters are slow to respond and the diesel engine is noisy under full throttle.
What’s most disappointing, though, is the way the DS5 behaves on a twisty, bumpy British road. The suspension is fine over large undulations, yet manhole covers, potholes and cambered roads make it crash and wander. Even in 4x4 mode, the front wheels slip and spin in the wet and the steering tugs in your hands when you accelerate hard.
It’s not a particularly good cruiser, either. The ride is fidgety and the steering is oddly weighted – it’s responsive and light initially, then gets heavier the more you turn. It needs constant correction to stay in a straight line on the motorway.
So the Hybrid4 is not great to drive, but it is well equipped. Our car had lane departure warning, headlights that turn with the steering, plus a multimedia system with sat-nav, road sign recognition and Bluetooth music streaming.
The trouble is, you could buy a Range Rover Evoque, Audi A6 or BMW 5 Series for the cost of this Hybrid4. The DS5 will definitely attract customers who want to stand out, but we think the cheaper, non-hybrid models make more sense.
Share this on TwitterShare this on FacebookEmail