Does the bold new family car deliver on the promise of its looks? 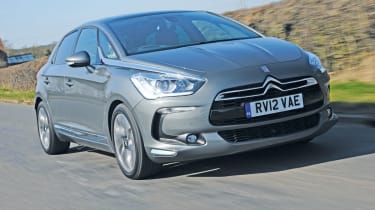 The Citroen DS5 is one of the most flamboyantly styled cars on the road. With a diesel engine and manual gearbox – the best combination in the range – this is an interesting alternative to the mainstream. But would we buy one when we could have an Audi A4 or BMW 3 Series, albeit not quite so well equipped, for a similar amount? Not a chance.

It’s not very often a new car comes along that makes you shout out ‘wow’. But the Citroen DS5 isn’t like anything else on the road. It looks more like a one-off motor show concept than something you can buy.
The interior is even more dazzling than the exterior, plus it feels great – definitely Citroen’s best quality yet. Everything you touch oozes class: the dash is made from a material so soft that a passenger airbag probably isn’t necessary; the watch-strap-style ‘Club’ optional leather seats resemble those in a Ferrari and the solid metal door handles are like pieces of modern art.
Video: Watch CarBuyer's video review of the DS5
[[{"type":"media","view_mode":"content_narrow","fid":"68829","attributes":{"alt":"","class":"media-image"}}]]
The DS5 is cool – so cool that you want to fall in love with it. But will it break your heart? We found the Hybrid4 version flawed when we drove it in December 2011. Fortunately the diesel is much better. It’s quiet, smooth and, thanks to a nice spread of thrust, delivers strong performance. Economy and emissions impress, too.

It’s just a shame that the slick six-speed gearbox is the only part of the DS5 experience which will please keen drivers. The steering is so vague it feels as though the wheel is connected to the rack by a slinky spring, while the wallowy handing is no match for a Ford Mondeo, let alone cars like the BMW 3 Series, which the high price puts the DS5 in direct competition with.
Obviously, this being a Citroen, the trade-off is a ride as smooth as melted chocolate, right? Sadly not. Even though the car feels softly sprung, the suspension crashes over bumps.
If you spend most of your time on the motorway, none of this will be an issue. However, in the cold light of a daily commute, the novelty of the DS5 soon wears off – and what you thought was love turns out to be lust.
There is a reason road cars don’t look like concepts: the design on the outside demands compromises inside. And you’ll soon become irritated by the Citroen’s limited rear headroom, split back window, awkward button layouts, tiny glovebox and useless cup-holders.
When you drive something with less ‘wow’ factor – like a Volkswagen CC – you realise something the Germans have known for ages: boring works.
Share this on TwitterShare this on FacebookEmail