The luxurious Citroen DS5 Hybrid4 is more efficient than ever, returning 74.3mpg and 91g/km of CO2 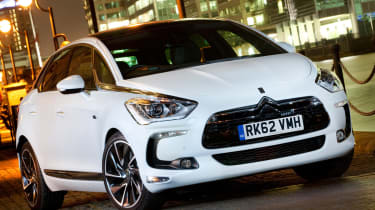 It’s not as accomplished as a German estate, and new versions aren’t cheap. But the DS5 makes a strong case for itself by offering head-turning looks and a decent drive. This Hybrid4 model adds appeal for company car drivers, too, while the fatter tyres help smooth the ride.

In the face of some capable but not exactly interesting German competition, the Citroen DS5 is something a bit different.

From the unique metal blade that sweeps back from the headlights up each wing to its concave, sculpted tail-lamps, this car oozes more style and character than any of its Bavarian rivals.

It’s the same inside, too, where ergonomics play second fiddle to style – there are no buttons on the doors, for example, merely a tasteful milled handle. The locks and electric window controls are in the centre console instead.

Yet once you get used to the odd positioning of the switchgear and the unusual part-MPV, part-estate dimensions, the DS5 is easy to drive. There’s a decent amount of space inside and a comfortable driving position, too. It’s pricey, but kit includes heated seats with the option of fantastic watch-strap leather.

The location of our hybrid car’s battery and motor assembly under the boot floor compromises the 325-litre load area slightly, while rear space isn’t overly generous. However, to ensure the newcomer stays in the 10 per cent company car tax bracket, and remains exempt from road tax, Citroen has introduced new engine management software for the 163bhp 2.0-litre diesel and improved the battery management system.

Opt for 17-inch alloys, instead of the 18s that fill the arches better, and the DS5 emits 91g/km of CO2. A further update will improve this to 88g/km in March. And while the cut in CO2 figures is good for your pocket, the higher-profile tyre and smaller wheel combination helps the DS5’s ride, offering more compliance over big bumps and less jiggling when you hit small ridges or potholes in the road surface.