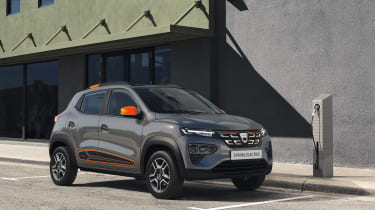 This is the Dacia Spring. When orders open in spring 2021, it’s set to become the cheapest new electric car available to buy in Europe. That means it’ll undercut the SEAT Mii Electric, which is priced at £19,800.

The styling is near-identical to the Spring Electric concept car first shown back in March - itself related closely to the Renault Kwid sold in India. That means the city car shape is bulked up with some SUV styling cues like chunky wheel arch cladding, roof rails and an above-average ground clearance.

The charge port is hidden behind a panel in a flush front grille, which is flanked by twin headlamp units with a slim LED lighting signature. The wheels look like alloy items, but are actually pressed steel. Launch versions of the Spring get a contrasting orange finish for the door mirrors, roof bars and trim beneath the front grille.

Despite the SUV look, the Spring’s proportions are appropriate for urban driving: at 3,734mm long and 1,622 mm wide, it’s just marginally longer and wider than a Volkswagen up!, and much more compact than a typical supermini. 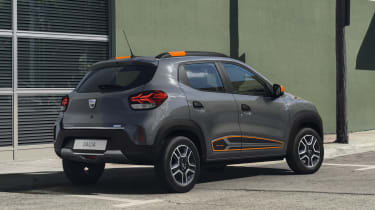 Dacia claims plenty of space inside the spring, with even the rear seats being accommodating enough for two adults. The glovebox, door pockets and a central storage box provide 23.1 litres of storage for front occupants, with further door cubbies in the back, too. For more substantial storage, the Spring gets a 300 litre boot - well above average for the city car segment.

Up front, the functional dashboard is lifted from the Renault Kwid. There’s blue trim highlights on the doors and air vent surrounds, while an optional seven-inch touchscreen multimedia system, available with a reversing camera, Apple CarPlay and Android Auto, sits below the centre vents. Also among the extra-cost features are air conditioning, electric door mirrors and a full-size spare wheel, while all-round electric windows, central locking and a 3.5-inch digital display between the dials are all standard.

Under the skin, Dacia has equipped the Spring with a 43bhp electric motor with 125Nm of torque. It’s paired with a 26.8kWh battery, which according to official WLTP testing allows for a range of 140 miles on a single charge - though this could increase to 183 miles in the type of urban driving it’s designed to do. No acceleration figures have been released, but Dacia states a top speed of 78mph. 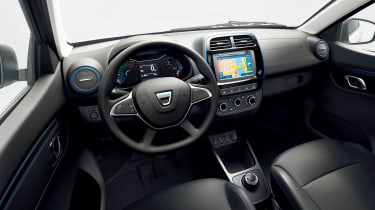 More relevant to urban driving than its top speed is its manoeuvrability, an area where the Spring promises to excel. A turning radius of 4.8 metres is only 20cm greater than that of a Honda e, and should ensure that it’s very easy to park.

The Spring will offer DC charging as an option - 30kW charger tops the battery to 80 percent in under an hour. A 7.4kW wallbox fully replenishes the Spring in five hours, a 3.7kW archives the same in 8h30, and it takes 14 hours to top up through a standard plug.

Dacia will also offer a smartphone app which allows users to monitor charging status from their mobile device, locate the car in real time, and pre-heat or cool the car in vehicles equipped with air conditioning.

As well as promising low purchase prices, Dacia will also offer two other Spring variants: one will be offered through its Zity car sharing scheme across Europe (though not currently in the UK), while a commercial version will also be produced. Finished in white only, the Spring Electric Cargo offers an 800-litre load bay and can carry a payload up to 325kg.

Click here to find out which electric cars have the longest range... 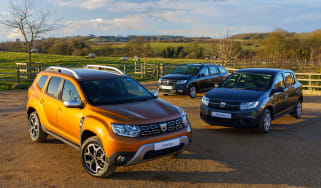