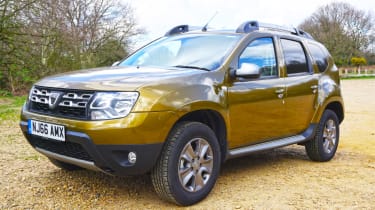 The converted SUV is a niche class of light commercial vehicle, but one intriguing addition is the Dacia Duster Commercial. It's based on the budget brand's Duster SUV, but like other converted 4x4 models, the back seats have been replaced by a large load area, while the back windows have been blanked to create a hidden cargo area.

As a commercial vehicle, the Duster makes a lot of sense. The rugged looks offer something different to a conventional van, while Dacia's no-nonsense value pricing structure means you get a lot of vehicle for your money. A payload of 550kg isn't the biggest on sale, but there's room enough for long loads, and the large plastic load bed makes plenty of room for long items. Add in the standard-fit roof rails, and the Duster offers decent overall practicality.

The Duster Commercial gets the same body style as the SUV, so access to the load area is via the rear tailgate or by the side doors. The doors even retain their electric window switches, although they are non-functioning. If you're sitting up front, the only signs that you're driving the CV version are the blanked out side windows and lack of rear seats - the dashboard and front interior is exactly the same as the SUV's.

Rather than replacing the back windows with metal, as seen on other car-based vans (Fiat Doblo/Vauxhall Corsavan), the Duster has fixed glass side windows with an opaque film to black them out - on white cars, this is a white film added to the outside, while cars in other colours get a black film on the inside. That means from the outside these versions of the Duster Commercial retain the rugged looks of the SUV without revealing their CV practicality. 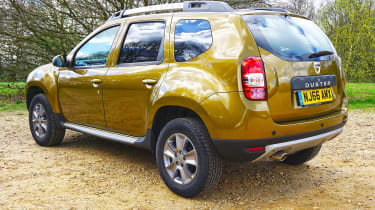 The Duster Commercial range comprises two trims, basic Ambiance and higher spec Laureate. The engine range has been trimmed down to just the 1.5 dCi diesel, too. Both models are available with front wheel drive or 4WD, but there's no automatic gearbox option. Fuel economy for the 2WD Duster is claimed at 56.5mpg, while the 4x4 has a claimed figure of 54.3mpg. As with all LCVs, road tax is fixed at £240 - £100 more than for the SUV - while company car tax is charged at the flat rate of £3,230 per year, which is about £1,000 less than it is for a 1.5 dCi Laureate 4x4 SUV using emissions-based BiK rates. Although of course this model has folding back seats with seatbelts and electric windows.

Prices start at just over £11,000 excl VAT for the Duster Commercial, but the top-spec model is only £3k more expensive, making it a great-value alternative to a small van. In reality there are no direct rivals to the Duster, although you might consider it if you don't need a massive payload and want something that looks more interesting than a small van like a Ford Transit Courier or Citroen Nemo.

One attraction of the Duster is its tempting purchase price. Models range from £11k-£14k before VAT, so you get a lot of CV for your money. With prices so low, even the top-spec Laureate model looks tempting. And with the driver and front passenger benefitting from the same range of kit as SUV buyers, the Duster feels less like a CV than most other vans at this price point.

There's just one engine to choose from in the Dacia Duster Commercial, and it's Renault's long-running 1.5 dCi diesel. This engine has been used in a wide variety of Renault, Dacia, Nissan and even Infiniti models, and here it makes 110hp with 260Nm of torque.

Power is sent to the wheels via a six-speed manual gearbox – unlike the SUV, there's no auto box available on the Duster Commercial - and there's the choice of front or four-wheel drive. The 4x4 features a 4WD lock function, but there are no low-range gears. Instead Dacia has fitted a short first gear to boost the Duster's off-road ability. 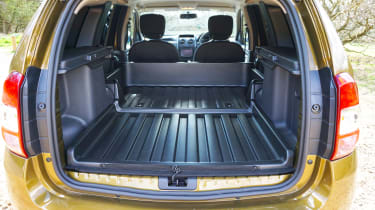 The 1.5 dCi is rated at 56.5mpg or 54.3mpg, depending on whether you choose front or four-wheel drive, and there's a 50-litre fuel tank on board. The Laureate model has standard-fit cruise control, which should help maintain speed and regulate economy on the motorway.

While the Duster Commercial makes an intriguing alternative to a conventional van, it does require you to compromise a little on practicality. Access to the load area is reasonable, although the SUV's 210mm ground clearance and raised ride height means loading heavier items in and out will be trickier than it would be in a regular van. The rear tailgate should be easier to open and close in tight spots where side-hinged back doors might be tricky, though.

The five-door body is carried over from the SUV, so the side doors don't leave as much of an opening as a sliding door. At least you can access the load area from either side - not all vans have twin sliding doors as standard. The large load tray that's been fitted in the back of the Duster has a rather high lip towards the front.

While that prevents items sliding forward into the cabin, it means lifting items in and out will be a bit trickier than it is with a conventional van. Dacia offers either a steel mesh bulkhead or a solid one as an option to separate the load area from the cabin. That large plastic tray is fitted to a metal frame that bolts in place where the back seats are in the SUV. This lifts to reveal a wheel well for the spare that you get on 4x4 versions, or it doubles as under-floor storage for the 2WD model.

The Duster has been on sale in the UK since 2013, although it went on sale in Europe in 2010. It uses plenty of tried and tested components from the parts bin of parent company Renault, so everything should work properly, even if it's not the highest quality inside. 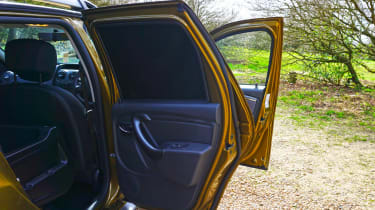 It's clear that the switchgear comes from models like the Renault Megane and Clio, while the dot-matrix displays do look a little dated. The engine is a tried-and-tested 1.5 dCi diesel, and the Duster's running gear is developed from other models in the Renault family.

Euro NCAP gave the Duster a three-star rating in 2011, which isn't great. However, you get electronic stability control, four airbags up front and tyre pressure monitors as standard. The Duster 4x4 has a space saver spare wheel, but the 2WD car only has a repair kit - a spare is available as an option.

The Duster Commercial drives exactly like the SUV version, so it delivers sprightly low-speed performance, but can get a bit raucous when you increase the pace. The 1.5 dCi diesel has plenty of torque, so will be able to cope if you load the Duster up to its maximum 550kg payload (which is the same for the 2WD and 4x4 versions), and the six-speed gearbox is easy to use.

One niggle is that Dacia has fitted the Duster an ultra-short first gear in lieu of a low range box. That means you need to change up to second almost immediately when you pull away from the lights, as it lets the engine rev its head off from about 35mph. But once you're beyond that, the rest of the gears are well spaced, and the Duster cruises well at motorway speeds. It's not the quietest car, because that open rear end amplifies road noise from the tyres, although it's not as noisy as a non-bulkheaded van.

In corners, the Duster contains body roll well for an SUV, and the suspension soaks up bumps reasonably, too. The steering is a little vague, but there's decent grip and the stability control can't be turned off completely to ensure a certain level of security when driving.

The bonus of an LCV that's a converted SUV is that four-wheel drive is readily available, and in that instance, the Duster Commercial is the cheapest four-wheel drive CV on sale. The Duster 4x4 has a rotary controller on the dash that switches between front-wheel drive, automatic 4WD and a 50:50 locking function for improved off-road ability. With over 200mm of ground clearance, short front and rear overhangs and decent suspension travel, the Duster Commercial could be a great choice for those working on building sites or off the beaten track.

The Duster's extensive use of hard plastics and tough fabrics came as a bit of a shock to SUV buyers when it arrived in the UK in 2013, but these are perfect attributes when it comes to the Duster Commercial. The tough materials extend to the load area, where the large plastic tray is made from the same hard-wearing material. Under the tray the floor is carpeted, which helps surpress road noise and boosts refinement, and it means there's no exposed metal to get scratched or damaged. 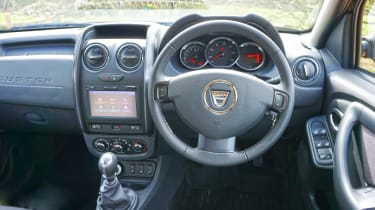 One quirk of the Duster Commercial means the Laureate version still has a set of electric window switches on the driver's door, even though the rear pair are blank, while both rear doors still have their electric window rocker switches, although they are fixed in place.

The Ambiance model is lightly equipped as standard, and it only has steel wheels, a heater and manually operated wing mirrors among its standard kit tally. Move up to Laureate and air-con and heated electric mirrors are fitted, as is cruise control and a trip computer. Some additional piano black trim boosts quality, while alloy wheels and a leather steering wheel are included. You can add leather seats to the Laureate, while sat-nav is available, too. With this you get a modern infotainment system with a clear screen and plenty of connectivity options.

Seat comfort is good, although the height adjustment for the driver's seat can feel a little flimsy, while the only compromise in terms of driving over the Duster SUV is the slightly restricted over-the-shoulder view, courtesy of the blacked-out side windows.