The DFSK Loadhopper offers the space of a panel van, with the footprint of a smaller van. Economy is worse than rivals but it’s cheaper 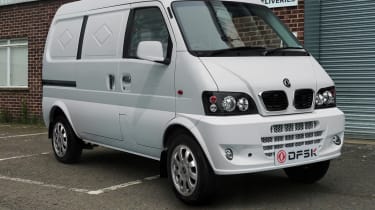 The DFSK Loadhopper offers a range of microvans imported from China. The comprehensive range includes a van, single and double cab pickups, single and double cab tippers, a window van and a minibus. The double cab pickup is available with two body styles. The dropside has removable, bottom hinged side panels and tailgate, while the Fixedside has fixed body sides. All models are offered with a choice of 52hp 1.0-litre or 77hp 1.3-litre four-cylinder petrol engines, except for double cab models, which are only available with the 1.3-litre engine. There are no diesel engine options. The importers hope to revive the microvan sector in the UK, popular in the 1980s and early 1990s. The advantage is that the van variants offer a body size similar to a small panel van like the Citroen Berlingo, but on a much more compact vehicle.

The DFSK models are powered by a small, hard-working petrol engine. The result is combined fuel economy of between 36mpg and 38mpg, notably higher than a small diesel-powered van. The Citroen Berlingo HDI 75 L1 for example, with a similar capacity body, has a combined fuel consumption of 55.4mpg, although the Loadhopper has a list price that is £3,000 to £4,000 cheaper. CO2 emissions are higher too – 184g/km for the 1.3-litre Loadhopper van compared with 133g/km for the Berlingo. Since Vehicle Excise Duty for light CVs doesn't include a CO2 emissions factor, the two vans attract the same VED rate - £220 a year. Service intervals are set at 12 months, not as good as the Berlingo’s 20,000 miles/24 months, although without a mileage qualification, it's difficult to make comparisons. The Loadhopper is in group 4 for insurance purposes, higher than the Citroen Berlingo in groups 1 and 2.

To achieve a similar-sized body to larger vans, such as the Citroen Berlingo, Peugeot Partner, Fiat Doblo and Renault Kangoo, it's inevitable that the narrow Loadhopper is both taller and longer than its more conventional rivals. Comparing it with the shorter Renault Kangoo van, which has a 3.0 cubic-metre load volume compared with the Loadhopper’s 3.2 cubic metres, the Loadhopper load area is 464mm longer and 211mm higher than the Kangoo, but 529mm narrower. Twin sliding side doors are fitted as standard to the Loadhopper, giving good access to the load area. On the other hand, the Loadhopper offers a wider range of body options than most conventional rivals, which do not offer a dropside or tipper body, except for the Fiat Doblo Work Up dropside. The Fiat Doblo, Citroen Berlingo and Peugeot Partner all offer platform-cab models, so buyers could source bodywork of their choice for these models. The Loadhopper tipper is supplied with a three-way tipping body, allowing tipping to either side or the rear. A 665kg payload would make it suitable for small building jobs or landscape maintenance. The single-cab pick-up offers a gross payload of 907kg, almost as much as the Fiat Doblo Work Up’s 1,000kg, so could be suitable for a wide range of construction or landscape maintenance duties. The Loadhopper’s width makes it suitable for city operations or in parks where it would have to operate on narrow paths. Although the Loadhopper van offers a load space similar in size to many small panel vans, it's available in only one body size, whereas some rivals, such as the Fiat Doblo and Ford Transit Connect are available with a longer body and a high roof. Others, such as the Citroen Berlingo, Mercedes Citan, Peugeot Partner, Renault Kangoo and Vauxhall Combo are available with a longer body. Most also offer a crew van, too, although double cabs are available with the Loadhopper pickup and tipper, and there's also a window van option.

DFSK models were only launched in the UK in late 2011 but reliability doesn't appear to have been an issue so far. The Loadhopper range comes with a three-year/60,000-mile warranty, or the option of two years with unlimited mileage. In safety terms, the design is far better than the forward-control 1980s microvans because the Loadhopper driver sits behind the front axle. But safety equipment is lacking compared with conventional rivals – driver airbag is only available in an option pack, while a passenger airbag is not available at all. ABS brakes are not available with some models, but are available as part of a £1,000 option pack for others.

Drivers may be surprised to find that power steering is not standard, which could make for a little muscle flexing if driving a fully laden van. Power steering is offered as part of a £500 option pack, however. But the Loadhopper has a tight turning circle, tighter than its conventional rivals, making it ideal for urban deliveries. With 52bhp or 77bhp from a small petrol engine, performance is good enough for urban traffic, provided you don't have a heavy load. It could be a different story on a motorway with a full van, which is not where the DFSK feels comfortable. The brakes need more pedal pressure than required in a conventional rival, but they work well enough.

It’s a no frills interior, with a dashboard design and layout that would be familiar to anyone who drove a Japanese van from the 1980s or early 1990s. Refinement is not a strong point – there’s only the seat cushion between you and the engine cover. Tall drivers may find they are short of legroom in the single-cab tipper and pick-up models because rearward seat movement is more restricted. Hard plastic and painted metal are part of the interior décor. The seating position over the engine means there's restricted storage space in the cab. Although there is plenty of headroom, the cab is narrow. Seats are firm and the seating position upright.