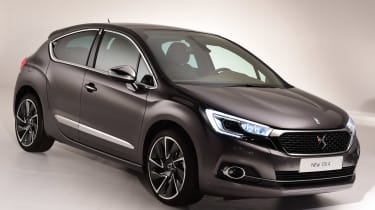 DS, the fledgling premium sister brand to Citroen and Peugeot, has revealed the new DS 4. It's been unveiled in tandem with a new crossover-style DS 4 Crossback, meaning the car now comes in two distinct body styles.

The most striking difference between old and new DS is the new nose – very similar in design to the new DS 5’s, featuring a wide, upright grille surrounded by chrome ‘DS Wings’ with a prominent DS logo in the centre.

As is becoming of the DS 4’s positioning as a premium compact hatch to rival the Audi A3 and BMW 1 Series, the new headlamps feature some intricate detailing and advanced technology. There are 84 LEDs in the daytime running lights, while scrolling LEDs are used for the indicators. 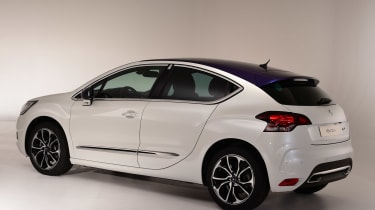 The main xenons are adaptive, following the steering to light up a corner showing where you’re going rather than where you’re not – this is another nod to the original DS, which was the first car to use adaptive headlights. Low down at the front are LED foglamps that also light up to give extra cornering assistance.

Every detail on the new model is referred to as “premium” by chief designer Bernard Germain and DS 4 product manager Uberto Gavazzi. “We’ve got even more advanced technology on this car and we’ve added extreme refinement to each design detail,” said Gavazzi.

Although the basic shape hasn’t changed, with its sculpted sides and pronounced haunches to give what Germain describes as “an athletic, purposeful stance”, those new design details extend to personalisation options, like those introduced on the DS 3 supermini. 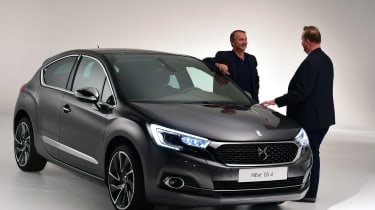 So you can now buy a DS 4 with a contrasting roof colour – all fairly restrained and limited to just four options: Perla Nera Black, Whisper Purple, Virtual Blue or Tourmaline Orange. When added together with the body colours, that means a total of 38 colour combinations – although Germain is quick to point out that he thinks a Perla Nera Black roof with dark grey bodywork has the most premium look. However, the Virtual Blue works brilliantly with the pearlescent white paintwork, too, and highlights the cleverness with which the contrasting roof is created.

Rather than look for a join in roof and door structure or a crease in the bodywork, the transition from one colour to another is unusually on a totally flat surface above the doors. It’s a potential nightmare in the paintshop, but DS workers at the French Mulhouse factory have been trained to get it just right – it takes five workers on the line to get the perfect finish required. 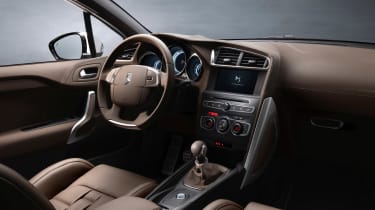 Having DSs produced on the same line as the Peugeot 2008 and Citroen C4 has meant a €400million (£366.5m) investment in Mulhouse and a greater focus on quality. And it’s recently been confirmed future DSs will be built there, too.

Personalisation options extend to the door mirror caps that can be had in body colour, chrome, contrasting roof colour or in matt black with the DS monogram etched into the surface. New alloy wheel designs also feature.

The premium story continues inside with the new option of a full leather dash top and door panels in two colours – hand stitched, taking around eight hours each. DS’s unique ‘watch strap’ leather seat facings are also available, while the rest of the cabin benefits from plenty of neat chrome touches and soft plastics.

The tech story is twofold, with Apple’s CarPlay featuring in the class for the first time (and making its debut in a PSA Peugeot-Citroen group car), activated via a seven-inch touchscreen that helps to reduce the button count by 12. 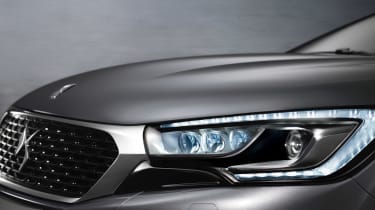 CarPlay will make use of the phone, text, mapping and music features of an owner’s iPhone, with Apple icons displayed on the screen. A MirrorLink feature will mimic what’s on the screen of other brands of smartphones, too.

Then there’s DS Connect, which gives the option of SOS assistance in the case of an accident or breakdown, linked to a GPS receiver that can alert emergency services to the car’s whereabouts. It’ll also monitor mileage and suggest when servicing’s required, send an alert if the car’s driven into a pre-assigned area and track the car if it’s stolen.

Otherwise, the interior is unchanged, with plenty of room up front and a large windscreen that extends up towards the driver’s head – one reason why DS doesn’t offer a panoramic sunroof option.

Frustratingly for rear passengers, the rear windows still don’t wind down and the DS 4 still isn’t the most spacious car in its class. The boot, for example, remains pretty average, at 370 litres, although it’s a nice square shape. Bernard Germain and his team have avoided the temptation to tamper with the taut lines at the back. “We have removed the Citroen badge, though,” he reminded us. 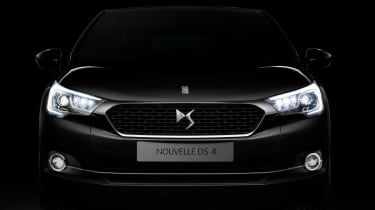 Minor tweaks have been made to the chassis to offer what DS says is dynamic, relaxed handling. As with the revised DS 5, things have been softened slightly to counter criticism of a harsh ride – as everyone at DS insists, a firm ride is not what this brand is about.

However, the centre of gravity of the DS 4 has been lowered to make the car feel more agile and stable.

The engine range is now all turbocharged, and features the award-winning three-cylinder 1.2-litre. This delivers 128bhp, yet is still capable of 55mpg fuel economy with CO2 emissions of 119g/km.

The 1.6-litre petrol with 163bhp now comes with a torque converter gearbox for smoother shifts (much more in keeping with DS’s refined image), while a 207bhp version of the same engine is reserved for the hatchback and not available in the Crossback.

Both models get the latest Euro 6-compliant BlueHDi diesels, though – all 1.6-litre units. The 118bhp version has an impressive torque figure of 300Nm, while still returning 72mpg and emitting 100g/km whether you choose the six-speed manual or new six-speed auto. 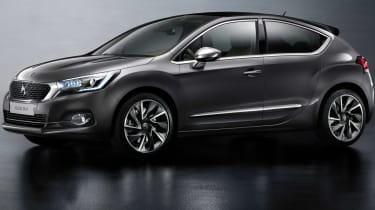 A 148bhp version is marginally less efficient, while the 178bhp diesel will still claim 64mpg and 115g/km in automatic form, and offer a massive 400Nm of torque. Although performance figures will be confirmed closer to the car’s November arrival, we’d expect the top-level DS 4 petrol and diesel models to offer a serious turn of pace.

These are early days in the life of DS as a premium brand, and this new DS 4 is, after all, a facelift of a model that was previously sold as a Citroen. However, it shows all the signs of what DS has to do to move in more exalted circles: the quality is good, there’s some really clever attention to detail in the design, it’s strong on technology and DS showrooms promise an experience that’s different from the norm.

What do you think of the new DS 4? Tell us in the comments below...