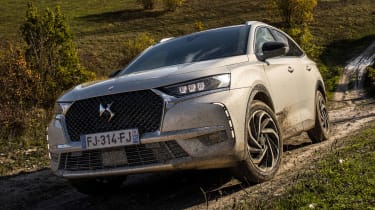 Based purely on the way it drives, the PHEV is the best powertrain the DS 7 Crossback offers. Smooth, refined and potentially very cheap to run, it's a step up beyond the conventional petrol or diesels. Whether it's one that justifies a £47,000-plus asking price, however, is much harder to argue. If you’re desperately bored by the German premium offerings, it will be worth a look, but otherwise the DS 7 Crossback can’t quite match the slick driving experience or infotainment tech found in its rivals.

This is the new DS 7 Crossback E-Tense: a plug-in hybrid SUV that marks the latest step in the manufacturer’s drive towards an electrified fleet of vehicles. Every new model released by the French brand from 2025 onwards will either be fully electric, or a plug-in hybrid with at least a 30-mile EV range.

The DS 7 Crossback falls into the second camp, taking on rivals like the BMW X3 xDrive30e and the Audi Q5 TFSIe. And it’ll face them up directly when it comes to price, too: the E-Tense is yours for between £47,725 and £56,075, depending on the model. That’s almost a perfect match to the more established premium choices from Germany.

The hybrid system is a significant model not only for DS, but the PSA group as a whole: while the DS 7 Crossback gets the low-emissions tech first, it’ll soon drive a wide range of Peugeots, Citroens and Vauxhalls, too. 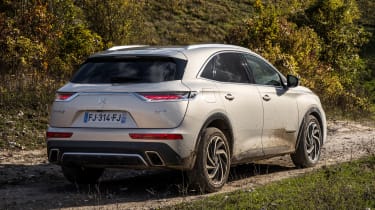 It’s a powertrain that DS itself dubs as a “high performance hybrid” - perhaps why the manufacturer quotes, of all things, a zero to 1000-metre time for the car (25.9 seconds, for those of you wondering). But there are plenty of more relevant stats to reel off about the E-Tense. The hybrid system uses a pair of electric motors teamed up to a 13.2kWh battery. The result is that the DS 7 Crossback can travel up to 31 miles between battery top-ups, and at speeds of up to 83mph in zero emission mode. Charging takes 1h 45 minutes from a 7kW charger, or eight hours from a regular three-pin plug.

It feels more than capable enough as an EV, too. Each of the two electric motors produces 108bhp, so performance feels only slightly less sprighly than the combustion engined versions - with the E-Tense delivering a much smoother, quieter drive.

Switching to either Hybrid or Sport mode brings the combustion engine into play. The 1.6-litre turbocharged unit makes 200bhp on its own, which combined with the electric motors can mean a total output of 296bhp and 450Nm of torque. That’s the same power as a Cupra Ateca, and 50Nm more torque. 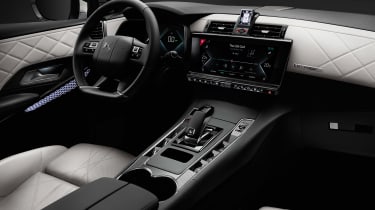 So as you would expect then, the combined shove of petrol and electric make the E-Tense much more lively in a straight line than the exclusively petrol or diesel models in the range. It’d be better still if the eight-speed automatic gearbox was a little more responsive when kicking down, but at least the electric motors manage to fill-in some of the delay.

As with the rest of the DS 7 family, however, in the other aspects of the driving experience this car hasn’t quite nailed its brief. It was never intended to be sporty, so it’s not really an issue that it lacks sharpness compared to a BMW X3 or a Jaguar F-Pace. What is more of a worry is that, long motorway runs aside, it never quite delivers the soft, pillowy ride comfort DS promises. Clever (in theory) adaptive dampers prime themselves to cushion bumps on the road ahead based on information relayed from forward-facing cameras, yet the DS 7 tends to either wallow without much control in Comfort, or fidget around in Sport.

Beyond those three driving modes, there’s also a 4WD mode. With adequate charge, this allows the DS 7 Crossback to venture off road in complete silence - the engine only kicking in to satisfy extreme torque demands. Traction is limited by the on-road tyres, otherwise the experience of silent, zero-emissions off-roading holds plenty of appeal.

Elsewhere, the E-Tense remains much the same as the combustion DS 7 range. The only exterior details that set it apart are a gorgeous ‘Pearl Crystal’ paint finish that’s optional and exclusive to the E-Tense, subtle badging, and a charging port flap located on the opposite side to the fuel filler. Inside, the cabin is a mix of beautiful finishes in some places - the choice of leather or alcantara layered across the dashboard feels particularly lovely - while in others, the plastic feels a little hard and scratchy.

Go for top spec models, though, and there’s some fascinating tech that little else in the class offers. A night-vision camera, for example, that can be display its images in the centre of the digital driver’s display, and which can recognise pedestrians and cyclists from hundreds of metres away. Then the LED matrix lights, standard across the range, have a cornering function which lights sections of road according to steering angle. There’s also a huge infotainment touchscreen, though while this looks pretty, it doesn't quite feel as slick to use as those found in other premium models.

As with the combustion-powered side of the DS 7 Crossback range, the E-Tense is available in three trim levels. The line-up kicks off with the Performance Line trim, which gets 19-inch alloy wheels on the outside and lashings of Alcantara interior trim inside. The Prestige model brings in leather seats (fully electric and massaging in the front, and with electric backrests in the rear), front parking sensors, a reversing camera and keyless entry. 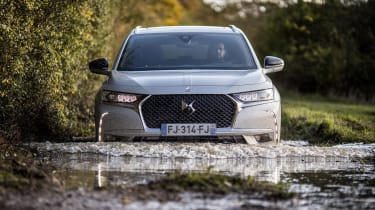 The range is crowned with the Ultra Prestige. That adds a panoramic sunroof, an uprated Focal sound system, a remote tailgate, and a semi-autonomous drive function, which accelerates, brakes and steers between lanes.

But there’s a price to pay for all of this tech, and it’s one that’s rather hard to justify. The DS 7 Crossback starts from £47,725, and based on a four-year PCP deal, it’ll cost £599 per month with a £6,284 deposit. However, Audi’s Q5 TFSI e benefits from not only a £4,700 deposit contribution and much stronger residual values, so on similar terms it’ll cost you over £5,300 less to finance over the four year agreement.

The DS 7 will achieve as much as 217mpg in WLTP tests, but while this will vary wildly in either direction based on the sort of driving you do and how frequently it’s charged, it’s the CO2 figure of just 33g/km that matters more. It places the E-Tense into the lowest Benefit in Kind company car tax bracket, something the BMW X3 xDrive30e (56g/km) can’t achieve. However, at 49g/km, the Audi Q5 just makes it.