The all-new DS 7 Crossback SUV has arrived to rival the BMW X1, Audi Q3 and Volvo XC40, but is it a contender? 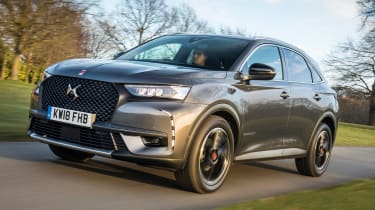 The effort DS has gone to in order to ensure the DS 7 Crossback feels neither like a posh Citroen nor like the rest of the premium crossover pack just about pays off. It certainly feels like a practical and flamboyant option to consider alongside the German norm, but it isn’t quite a class leader.

Since arriving as a brand in its own right in 2014, DS has treaded water in Europe with a selection of rebranded cars carried over from its days under the Citroen badge. Four years later, PSA is ready to push the marque out into the wild, so it’s no surprise to see that the first original DS model to hit European showrooms competes in the ultra competitive small premium SUV space.

The DS 7 Crossback is pitched as being an ‘avant-garde’ alternative to the likes of the Range Rover Evoque and Audi Q3, but it leaps right into the deep end of the market against other newcomers. As an indicator of just how busy this segment is the DS 7 has the latest BMW X1, plus the all-new Jaguar E-Pace and Volvo XC40 for company too.

With such strong competition, the DS 7 Crossback needs to stand out to avoid being swamped by its talented rivals. To that extent, DS hopes that the DS 7 can crack the market through a charm offensive. By the end of the year, 60 individual DS dealerships will be established in the UK, with a distinct focus on tailored customer service. 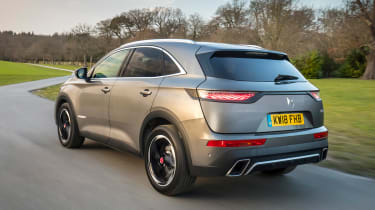 To drive, the DS 7 Crossback boasts safe rather than sharp characteristics. Body roll is kept relatively in check, but the steering is soft and numb, and isn’t improved by toggling the car into its Sport mode, which also introduces some bizarre sound actuation from the speakers in the cabin – not welcome considering the 2.0-litre diesel driven here can’t shake a coarse engine note.

It’s best to stick the Crossback into Comfort, and enjoy the full benefits of the decent cruising speed ride, only improved by the 19-inch wheels on this car and the addition of Active Scan Suspension. At low speeds though, the ride can become a little unsettled.

Performance isn’t really what the DS 7 Crossback is about, but the 2.0-litre diesel serves up decent punch thanks to 400Nm of torque. DS claims 0-62mph in 9.9 seconds, which is competitive in this segment. 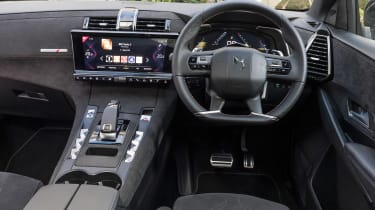 The brand is also banking on the DS 7’s styling inside and out as a hook to lure customers away from established premium brands. Launching with four trim levels, the Performance Line model tested here will prove to be one of the most popular options. These cars get a gloss black grille, 19-inch diamond cut alloy wheels, LED headlights, running lights and fog lights, plus ‘3D’ effect LED taillights.

While styling is a subjective matter, it seems as if the interior design marks a more radical departure form the norm compared to the DS 7 Crossback’s exterior. Performance Line cars are upholstered with a mixture of Nappa leather and Alcantara. Surrounding the huge 12-inch touchscreen infotainment system are lots of plain surfaces, while angular elements such as the vents and the chunky switchgear contrast with the simple dashboard. The interior’s centrepiece is a large B.R.M analogue clock sitting above the starter button.

The 12-inch display itself is slick and easy to use, and is underpinned by a row of touch sensitive buttons for many of the cabin controls. Behind the wheel sits DS’ take on the PSA Group’s 12.3-inch digital instrument cluster, complete with its own angular DS branded graphical interface.

A unique feature in this segment is the addition of an infrared night vision camera that beams a clear picture onto the display and highlights pedestrians and animals further down the road. It certainly works as advertised, but as a £1,600 option it seems a little steep for a system that’ll only work its magic on unlit roads at night. 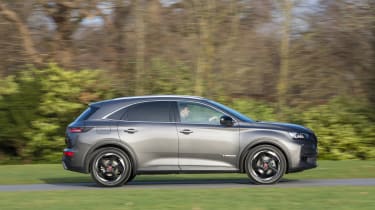 Space up front in the cockpit is good, and both driver and front seat passenger won’t have any trouble getting comfortable. In the back, legroom and headroom is generous, and a flat floor means that a middle seat passenger shouldn’t be too troubled for space too. However, that flat floor feels a bit shallow, which isn’t ideal for taller passengers. As a trade-off, the 555 litre boot is good for this class.

What will prove to be this car’s make or break point is its price tag. Though a new entrant into the segment, you’ll pay for the high level of standard equipment with a list price and monthly finance offerings that places it directly in the firing line of the new BMW X3 20d M Sport, and above the Volvo XC40 D3 R-Design – both of which are all-wheel-drive as standard too.