Petrol power makes the DS 7 a smooth cruiser on the motorway, but it still lacks the talent offered by the class leaders 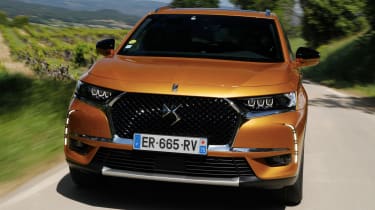 There’s no doubt DS has built an interesting car for its first model as a standalone brand, but the Crossback falls short of the class best in what is a red hot segment right now. Throw petrol power into the mix and it makes for a particularly smooth motorway cruiser, but the DS 7 still lacks the breadth of talent so many of its rivals possess.

The DS 7 Crossback has received a mixed reception since arriving as the upmarket brand’s hopeful breadwinner last year. As the firm’s first standalone model, it appears with quite an extensive brief. Not only tasked with leading DS away from Citroen, but spearheading what will be a charge of six all-new models. It has to beat plenty of established competition too, in what has become a seriously crowded patch.

With such an imposing to-do list, it isn’t too surprising to see that the DS 7 hasn’t quite ticked all the boxes. So far, we’ve found it to be distinct enough to turn heads, but not polished enough to really compete at the sharpest end of the posh SUV market.

With sales well and truly underway, the amount of choice in DS showrooms has expanded, with petrol versions now slotting in alongside the existing diesel options. Driven here is the range-topping PureTech 225 – the most powerful DS 7 you can buy before the arrival of a 300bhp plug-in hybrid next year. 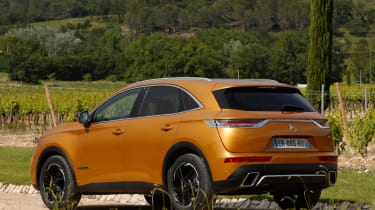 From a performance standpoint, the 222bhp 1.6-litre turbo petrol engine is more than enough for the DS 7 Crossback. The 0-62mph dash is completed in a claimed 8.3 seconds and it feels just as quick as that figure suggests. Power is sent to the front wheels via an eight-speed automatic gearbox, and is silky smooth in its delivery.

Refinement was one of the diesel DS 7’s undoings when we pitted it against the Volvo XC40 earlier this year, but things are much improved in this THP car. Ultimately, opting for petrol power over the diesel means running costs increase with fuel economy dipping to 48.7mpg, though that’s still a fair figure for a car of this size, thanks in part to the fact there is no 4x4 option.

There will be a second petrol option arriving later this year in the form of the (178bhp) PureTech 180, but it doesn’t serve up any fuel economy advantages. It’s only £1,500 cheaper on list price, too, meaning the differences on a monthly PCP finance deal are likely to prove minimal. Instead, buyers after more frugality would probably be better off waiting for the three-cylinder DS 7 Crossback models, which are coming towards the end of 2018.

Elsewhere, the package crafted by DS remains unchanged. In a bid to seek out comfort and refinement, the DS 7 misses the mark from a dynamic point of view; many rivals are much sharper to drive. Toggling Sport mode on the drive selector firms things up and adds a bit of weight to the steering, but it can’t hide its artificial feel, and it’s difficult to break into a confident flow on a series of sweeping bends. 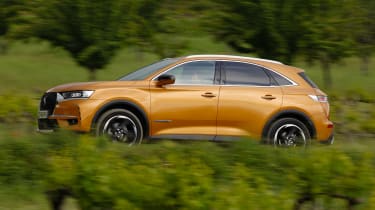 Instead, we preferred the DS 7’s Comfort setting. It utilises the Active Scan suspension system and at around 40mph the camera-based set-up picks up imperfections in the road nicely, resulting in a supple ride. It’s inconsistent at other speeds though; on motorways the DS 7 can feel a little wallowy, while it’s just too prone to picking up bumps, shudders and shimmies around town.

It’s frustrating, as the inconsistent ride spoils what is a nice place to sit. The DS 7’s cabin feels like a classy affront to the harder German norm, and it’s very spacious for rear seat passengers. The 555-litre boot is generous too, and even pips the larger Audi Q5.