B-MAX is fun to drive, yet is also comfortable and easy to park, too. 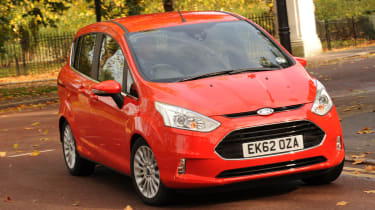 Given that the B-MAX uses the same platform as the Ford Fiesta, it’s no surprise to find that it's a fun car to drive. It features direct and well weighted steering, excellent body control and strong grip, and these combine to inspire confidence through a series of corners. The B-MAX is boosted by a torque vectoring system which distributes power to the front wheel with the most grip, which further improves handling.

Yet this composure doesn’t come at the expense of comfort, because the B-MAX soaks up bumps and does a good job of keeping wind and road noise out of the interior. Better still, with its decent visibility, light controls, responsive brakes and compact external dimensions, the B-MAX is a doddle to drive around town. Rear parking sensors are an option on Zetec and Titanium models. 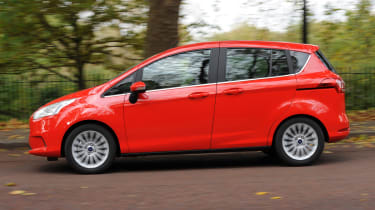 Ford B-MAX buyers wanting a diesel can choose the firm's latest 1.5 TDCi with either 73bhp or 93bhp. Both engines emit 98g/km emissions and return a claimed 74.3mpg, but they are both rather sluggish performers. If you can afford the extra outlay, we'd recommend going for the 93bhp version, as you won't need to work it quite as hard, so you're likely to get closer to Ford's claimed MPG figure. A 0-62mph time of 13.0 seconds is 2.1 seconds faster than the 73bhp model, but neither car is exactly rapid.

The entry-level Studio model is only available with Ford’s elderly 89bhp 1.4-litre petrol, while the larger 104bhp 1.6-litre petrol is the only choice if you want Ford’s slick six-speed Powershift twin-clutch gearbox - the rest of the range features five-speed manuals. However we'd only recommend the 1.6 if you must have an auto, because Ford's newer EcoBoost turbo petrol engine is far better.

The award-winning three-cylinder 1.0-litre EcoBoost unit with 99bhp can get from 0-62mph in 13.2 seconds, while the more powerful 123bhp 1.0-litre EcoBoost does it in 11.2 seconds. The latter also features start-stop, so has better claimed economy figures than the slower EcoBoost engine. The EcoBoost engines deliver a traditional three-cylinder thrum from under the bonnet, but it's not very loud, and adds a bit of character to how the B-MAX drives.