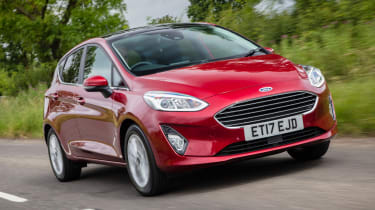 The new Fiesta is bound to be another sales success, but the diesel options will account for just a small slice of the pie. Indeed, even Ford expects tiny demand because the 1.0-litre petrol options are cheaper to buy, more refined and suit the car’s character much better. That’s not to say that the 84bhp 1.5-litre TDCI is an afterthought; this is a well thought-out diesel supermini. It’s just that its strengths are as much on company car tax forms as they are on the road.

Britain’s best-selling car gets a big update and a new look in 2017 - and with more than 120,000 registrations in the past 12 months, the Ford Fiesta is a car that can deliver big sales figures even at the fringes of its line-up. The new generation Fiesta has the most expansive range yet, too.

While the trio of 1.0-litre turbocharged petrol powertrains are the headline act in the Fiesta, a couple of diesel options appear too. Ford doesn’t have lofty aspirations for either diesel powerplant, though, and expects petrol choices to dominate sales. In fact, the firm predicts diesels will account for just nine per cent of new Fiesta sales in the UK, with those having a heavy slant towards the fleet market.

Both diesels make use of a revised version of Ford’s 1.5-litre TDCI motor, with a high-powered option boasting 118bhp and 270Nm of torque leading the pair. It’s not available just yet, though, so early diesel adopters will have to make do with the entry-level 84bhp version, which has 215Nm of torque. It replaces the 74bhp diesel found in the previous generation. That means a power bump of 10bhp and a heftier hike in torque of 30Nm. 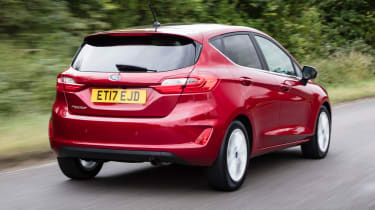 With this engine on board, the most frugal Fiesta manages to crack 0-62mph in a claimed 12.5 seconds, with a top speed of 108mph. The motor is paired with a six-speed manual gearbox, while both three-door and five-door bodystyles are offered.

On the road it doesn’t feel too sluggish. Though 84bhp means it’s a modest supermini in terms of outright performance, the 215Nm of torque is dished up with aplomb in the middle of the rev range, and its ability to pull itself out of trouble in third gear is impressive.

Diesel refinement was one of the old Fiesta TDCI’s trump cards, and it’s much the same story here. Naturally, working the engine hard will expose some rough edges and the decibels will climb, but for the most part engine noise is kept in check. Any of the petrols will make for a quieter companion overall, however, and for private buyers these cars are cheaper and more fun to drive.

This new Fiesta recycles the Global-B platform put to use so effectively in the old model, so it’s well within a shout of being the supermini class leader in terms of driving dynamics. The trademark sharp steering and excellent body control are carried over, but the cabin you’ll experience it from is all-new.

The interior is the biggest improvement on this new Ford Fiesta, in fact, and it feels like a more spacious, grown-up place in which to sit. Material quality remains much the same, with plastics par for the supermini course, but the interior has a cleaner, less cluttered design, with switchgear that’s easier to use than before. 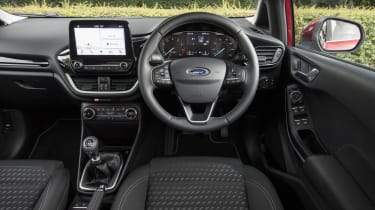 The tech highlight on all but entry-level models is a 6.5-inch touchscreen with Apple CarPlay and Android Auto, and the display can swell in size to 8.5 inches for an additional £300. The system it shows is slick and easy to use, and a big improvement on the cabin tech found on the old model.

In terms of fuel economy, Ford claims that this 84bhp powerplant manages 88.3 mpg on a combined run - but in truth, the fleet customers who opt for this engine will be more attracted by CO2 emissions of 82g/km. That figure brings a benefit-in-kind tax rate of 20 percent for 2017/18 - enough to keep the Fiesta in the mix with rivals on running costs for company car choosers.