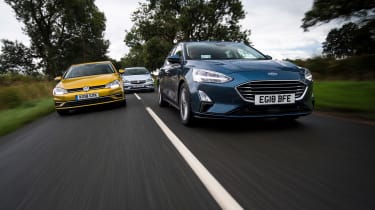 SUVS might be all the rage, but if you take a look at the list of top 10 best-selling new cars in the UK, it still routinely includes this trio of five-door family hatchbacks.

This fourth-generation Ford Focus promises what every successor does: more technology, greater refinement, even sharper driving dynamics and stronger practicality. But entering into a class as competitive as this means this new Focus is facing challenging opposition.

That comes here in the form of our reigning favourite family hatchback, the Volkswagen Golf. This car has set the benchmark in this market in recent years, and in Mk7.5 guise is one of the models the Ford will have to overpower if it wants to win. The other is the British-built Vauxhall Astra. It’s fitted with a downsized 1.0-litre three-cylinder turbo petrol engine here, just like its competitors, and arguably the Astra evolved this sector when it was launched in 2015, with key innovations in technology and space. That’s what the Ford will have to deliver as well. So which of the three is our hatchback hero? 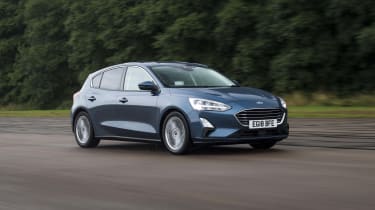 This fourth-generation Focus promises to address the Mk3’s packaging and infotainment flaws. We’re testing the £21,550 1.0 EcoBoost 125 in Titanium trim, which is likely to be a big seller.

As with the original, the Focus excels once you get it on the road. The ride and handling balance is a big part of that, because the Ford’s chassis delivers plenty of comfort despite its driver-focused set-up, thanks to the dampers’ ability to take the harshness off the majority of bumps. It means you can carry good speed down a rucked road without fear of wincing when you come to a particularly torn patch.

Despite this refinement to the ride, the Focus retains its trademark driver involvement andfun factor. In fact, it’s better than ever. The steering weight is just right for a car in this class and it responds quickly to your inputs, with a keen sense of agility for what is a conventional family hatch. The damping plays a part here, too, because there’s just enough roll to relay some feedback from the chassis (the steering is the most communicative of the trio as well), while there’s control to match, so the Focus feels the most composed car of the three at higher speeds. 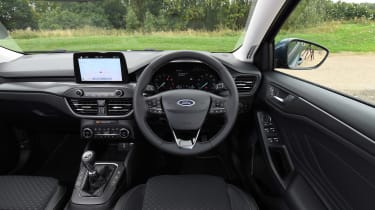 However, despite its power advantage, the Ford wasn’t as fast as the Golf in our performance tests. It sprinted from 0-60mph in 9.9 seconds, 0.3 seconds slower than the VW, but 0.6 seconds up on the Astra. Yet this performance gap is difficult to sense as you increase speed through the ratios; what is more palpable is the disparity in gear.

The Ford took 10 seconds exactly to accelerate between 50 and 70mph in fifth, which was 1.9 seconds slower than the Golf. Still, while the Focus might not quite match the VW against the stopwatch, the performance it offers is adequate, with the torque helping flexibility on motorways.

At all speed ranges the engine is remarkably refined and matches the mature feel to the ride, so the Focus is an easy car to live with.

Testers' Notes: “This latest Focus has gone back to its roots. It’s the best-driving car in this company and the family hatchback class as a whole. But will this be enough for it to rise to the top of the sector overall?” 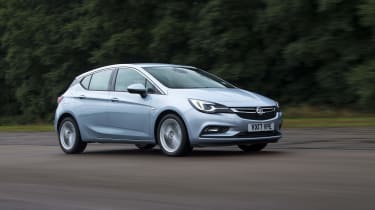 The Vauxhall Astra is one of the most versatile family hatchbacks on sale, and when we last tested this 1.0-litre turbo variant we’ve got here (£21,910 in SRi Nav trim), it beat its rivals. So it’s in with a strong shout against the Focus and Golf, two cars it’s been battling with for years.

Despite that weight saving over its rivals, the Astra’s engine is outgunned for both power and torque. And when you factor in a five-speed gearbox that offers fewer ratios to cover a similar speed range, the Vauxhall’s performance was the most sluggish. However, this is relative, because in isolation the Astra’s 12.5-second 50 to 70mph time in top gear is similar to the Ford’s, so it still delivers a decent degree of flexibility.

In the lower ratios between 30 and 50mph there was no hiding from the stopwatch; in fourth in particular the Vauxhall’s 7.6-second effort was two seconds adrift of the Golf’s. At least the British hatch is refined on the move at higher speeds, even if the gearshift action isn’t as nice as its rivals’. 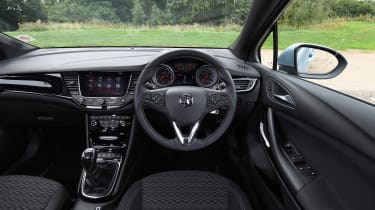 Where the Astra catches up is for ride and agility. It doesn’t have the Ford’s precision, nor can it match the Golf’s sense of solidity, but it does blend these attributes with ride comfort in a package that feels well matched. The suspension set-up is composed over all but the worst surfaces, and because it doesn’t offer as direct a connection between car and driver as you get in the Ford or the VW, it does at least mean it’s quite forgiving.

There’s plenty of vertical movement in the suspension, so it doesn’t feel as rigid as the Focus in particular. The Vauxhall delivers softer, looser control, and a good degree of comfort as a result. This does serve to highlight just how plush the Ford’s damping feels, though, because it easily matches the Astra in this respect but is much sharper with greater body control. The Golf is a close second.

Testers' Notes: “SRi Nav gets sports seats, while the driver’s chair is specially designed to boost comfort. The Astra’s driving position isn’t the best, but over plenty of miles we had no complaints for comfort.” 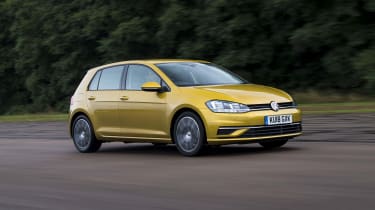 Volkswagen’s famous Golf is our current favourite family hatch, so the Focus is going up against the best. In 1.0 TSI SE Nav trim we’re testing here – a direct rival to the Ford – the Golf costs from £21,025, so is slightly cheaper. Does the Volkswagen offer more for less?

The MQB set-up is instantly recognisable once you’re under way. It gives the Golf a reassuring solidity to the way it drives. The damping isn’t quite as taut as the Ford’s, but the VW can match its control right up until the last high-speed bump on a quicker drive.

Not that these cars will routinely be driven like this; they’ll spend more time in town and on the motorway, where the Golf’s refinement comes into its own. It’s a match for the Ford here, and while the steering doesn’t have as much communication, it is just as pointy. It’s slightly heavier, but not quite as fast. 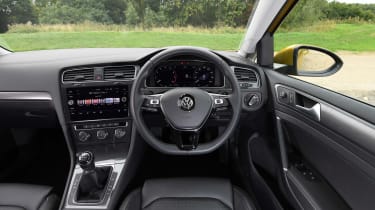 Although the Volkswagen doesn’t quite grip as hard, it offers more than enough dynamism and that rear suspension set-up doesn’t disturb the ride comfort. In fact, the Golf’s front-to-rear balance, down to its lovely plush damping, means it smothers typically cracked and marked UK roads. It’s much closer to the Focus in terms of comfort and composure.

The engine is just as refined as the chassis, too, and the Golf proved quicker at our test track, even though its performance trailed the Ford’s on paper. It was the fastest car from 0-60mph, taking 9.6 seconds – 0.3 seconds quicker than the Focus and 0.9 seconds up on the Astra – while despite its taller gearing it was also more flexible in gear. It was one second quicker than the Ford from 30 to 50mph in fourth, and two seconds faster than the Vauxhall over the same test. The Volkswagen is an accomplished all-rounder on the road, and this extends to the level of practicality it delivers.

Testers' Notes: “Equipment could swing this: VW offers more options than Ford on respective trims here. A reversing camera is £340. It’s part of a £500 package on the Focus and £750 on the Astra.” 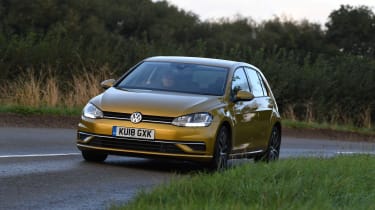 The Golf just shades the Focus. It doesn’t drive quite as well, but in this class that counts for less. The VW’s practicality, lower running costs, higher-quality finish and affordability are decisive in this test. It nearly matches the Ford for comfort, while its infotainment is the best here and edges it ahead. The VW has retained its crown, but only just – rivals are getting closer. 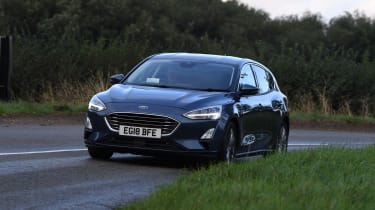 If you value the fun of driving in a usable, affordable but well-equipped package, the Ford is the car for you. It lacks a little of the VW’s versatility and still can’t match its premium appeal, but the Focus will be cost-effective to run and the engineering integrity here runs deep. You can feel it, and this makes it the most fun car in its class, so it gets a deserved commendation. 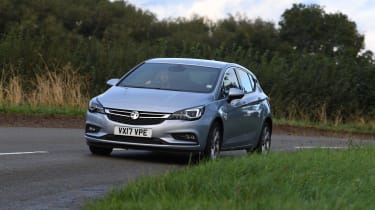 Three years since its launch, the Astra is still a great family hatch – and for the same reasons that initially made it a class leader. But newer rivals have emerged, and it trails the Ford and VW in too many areas. While it’s efficient, the Vauxhall doesn’t offer the performance, quality or space that the Focus and Golf do, which is why it comes third. We’d still recommend one, though. 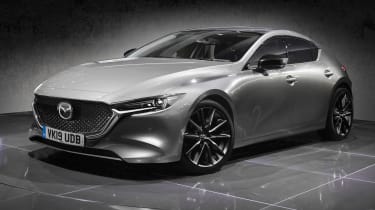 The new Mazda 3 will introduce some clever engine tech. With sharp styling, updated interior features and traditionally strong driver appeal, it will be the Focus’s closest rival when it arrives in 2019.