The new Ford Focus Estate is more spacious than ever before, but is it now a class leader? 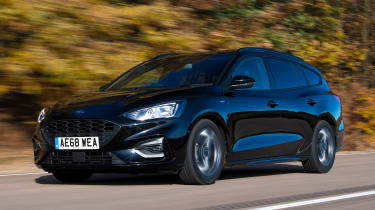 The latest Ford Focus Estate improves immeasurably on its cramped and fundamentally flawed predecessor. It’s big enough to compete with the very largest cars in its class, while matching them for low running costs and driver fun. If outright carrying capacity is your main priority, then a Skoda Octavia Estate is still the car to beat, however.

One criticism of the old Ford Focus Estate was that it simply wasn’t big enough. The boot, compromised by the standard car’s dimensions, simply couldn’t compete in such a capacious class.

Keen to rectify its most obvious failing, Ford has stretched its C-segment family car in every direction to make it much more practical than before. In fact, the 608-litre boot is now just two litres shy of the class-leading Skoda Octavia Estate.

Fold the rear seats and you’ll uncover a whopping 1,653-litre load bay. It’s not as big or usable as the 1,740-litre space in the Skoda, but it trumps most other cars in this segement (including the Volkswagen Golf wagon) as well as Ford’s Kuga SUV, too. 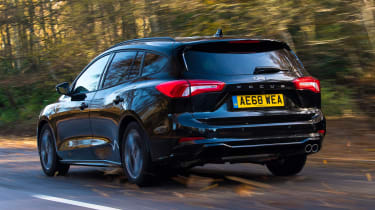 Space in the back of the new Focus Estate is generous enough. While it can’t beat the Skoda in this regard, it’s bigger and more accomodating than the VW. Our ST-Line test car had a black headlining, however, which made it feel more cramped than the lighter fabric in Titanium cars. 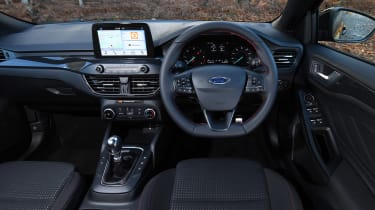 We’d still recommend one of the small capacity petrol engines to lower-mileage motorists, but that diesel engine will undoubtaedly appeal to high-mileage business users. Ford claims a WLTP-rated 76.3mpg and super-low 97g/km CO2 emissions. That puts it in the 24 per cent Benefit in Kind (BiK) tax bracket, while a comparable Skoda sits one band higher.

Those numbers do come at the expense of performance, however. While on paper it looks punchy enough (0-62mph takes 10.3 seconds), you have to work the EcoBlue’s six-speed gearbox to get the best out of it. The long gearing means you’ll find yourself sitting in second or third around town, with sixth reservered almost exclusively for higher-speed motorway driving.

And yet the Focus Estate is just as fun to drive as the hatch on which it is based. The steering is sharp and the chassis feels just as agile in spite of the added length.