Ford has added a diesel to the Focus ST line-up - but can it see off sizzling V40 R-Design and class-leading Golf GTD? 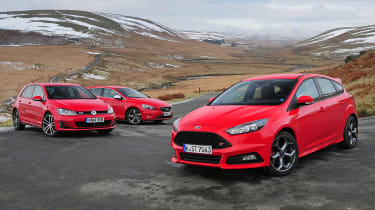 Can you have your cake and eat it? Over the past few years, the emergence of performance diesel hatchbacks has given drivers access to a tempting mix of thrills and frugal real-world fuel economy.

Up until now, the Volkswagen Golf GTD has topped the class, but there’s a new group of hot diesels ready to snatch its crown. First up is the new Ford Focus ST diesel. It offers a near-identical power output to the GTD and is also £675 cheaper; but can it match the VW’s practicality and versatility?

Volvo’s latest V40 D4 R-Design is a more leftfield choice. It’s also the most powerful and efficient of the trio on paper, but it still has to live up to its hot hatch billing – an area where previous quick Volvos have always struggled.

All three cars share the same recipe yet deliver subtly different results, so we hit the road to find out which tastes best.

For individual reviews, click the links above. To find out the result of this triple-test, scroll down the page... 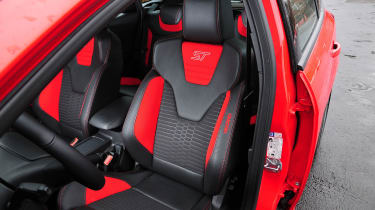 Hot hatches have to be usable in the real world, which means kit is important. The Focus ST gets plenty of standard tech, including cruise control and heated seats, while the V40 features less. Its options list is also pricier than VW’s, which is why our car cost £33,000. 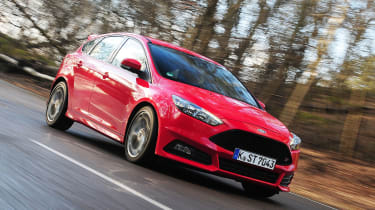 Although these three cars share a similar approach, each delivers a very different driving experience. The Ford is characterised by its tenacious grip and punchy engine, while the VW feels smoother and more refined, treading the line between hot hatch and everyday usability with greater balance.

The Volvo puts the emphasis more on the side of comfort rather than performance, and is subsequently less involving to drive. 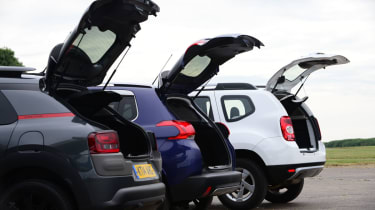 The Golf’s boot is the biggest and most practical, helped by the luggage compartment sitting flush with the rear bumper. There are large lips in the V40 and the Focus, and both have curvier boot lids which reduce the size of the opening. The Ford’s load bay is by far the smallest of our trio. 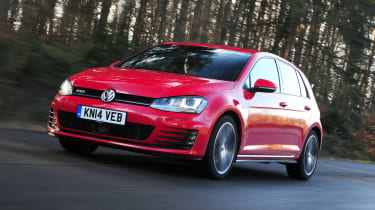 The Golf GTD retains its crown as the best fast diesel hatchback on sale thanks to an unbeatable mix of performance, practicality, fine handling and fuel economy. It feels a cut above the Ford and the Volvo, so if you want one car to perform many tasks but don’t want to compromise when it comes to excitement, the VW should be at the very top of your wish list. 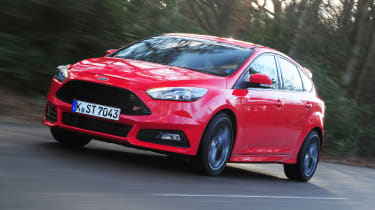 Ford has taken a while to make an alternative hot hatch, but its initial effort is superb. The Focus ST diesel is a great driver’s car, with a grippy, composed chassis and a powerful engine. It can’t quite match the Golf for usability or quality, but if you value how a car drives over all else, the Ford triumphs. It’s cheaper, too, even if the interior doesn’t feel as classy as the VW’s. 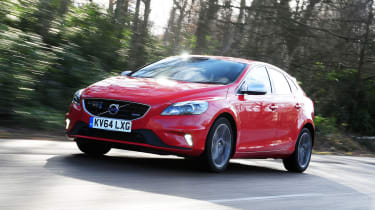 The Volvo can’t live up to the Volkswagen or Ford in any one area, which is why it finishes third here. There are many things to like about the V40 R-Design but, despite its big power output, the engine doesn’t quite feel as gutsy, the chassis isn’t as able, the interior isn’t as slick and practical and the price isn’t as appealing as its more capable, better-equipped rivals’.